Patricia A. Shirley’s newly released “Memories from a Federal Working Girl” is a closer look into the author’s own wonderful federal journey

“Memories from a Federal Working Girl” from Christian Faith Publishing author Patricia A. Shirley is an awe-inspiring account that traces the life of a woman whose working career circled around her passion for serving the government—of which she actually did for four decades. 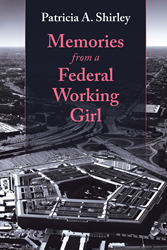 “Memories from a Federal Working Girl”: a promising woman’s federal journal and a magnified look into her triumphs and failures. “Memories from a Federal Working Girl” is the creation of published author Patricia A. Shirley, a writer who spent forty years in federal service. She worked as a file clerk in the US Food and Drug Administration, and later worked for the Department of Defense. Her final position was with the Administrative Office of the US Courts before she retired in 2008.

Shirley writes, “Patricia always wanted to work for the federal government. After a visit to the White House when she was nine years old, she was ‘hooked.’ Patricia grew up in rural Orange, Virginia, where her family owned a small farm. There, with her parents, Willis and Helen Shirley, three brothers, three sisters, and Grand and Pappy, her paternal grandparents, she was told if she worked hard she would succeed. That there was ‘no one out there better than she,’ but to always remember she was no better than anyone else. She began her federal career as a file clerk working for the US Food and Drug Administration. After a year, she accepted a position with the US Navy where she worked as a draftsman and report preparer. Continuing her federal journal, she accepted a position with the US Air Force where she worked as the division secretary for the chief of the division. Seeking an increase in pay and more responsibility, she accepted a position with the Office of Secretary of Defense as a legislative assistant, interacting with congress members and their staffs. After a short period, she was offered a position in the international and intelligence law division, interacting with our intelligence agencies: CIA, DIA, and National Security Agency. Patricia continued to progress in her career accepting a position with defense research and engineering, first working with and interacting with our NATO allies and then with the Defense Science Board where she became executive assistant to the director. After the 9-11 terrorist attacks, Patricia accepted a position with the administrative office of US Courts as an administrative analyst planning training sessions for judges’ secretaries. Patricia ended her federal career in 2008 after forty years of serving our government.”

Published by Christian Faith Publishing, Patricia A. Shirley’s new book is an inspiring read of a courageous woman who had always wanted to establish a career in the federal government—and so, she did.

This manuscript holds the author’s federal journal as she traces back her career in the government of 40 years in service.

View a synopsis of “Memories from a Federal Working Girl” on YouTube.

Consumers can purchase “Memories from a Federal Working Girl” at traditional brick & mortar bookstores, or online at Amazon.com, Apple iTunes store, or Barnes and Noble.

For additional information or inquiries about “Memories from a Federal Working Girl,” contact the Christian Faith Publishing media department at 866-554-0919.