“Eden Untouched” from Christian Faith Publishing author Patricia Alexander LeBeauf is a gripping adventure of a young man who sets out on a mission to secure the tree of knowledge, so the world would forever remain in the state of utopia only to fail and wreak chaos in the world. 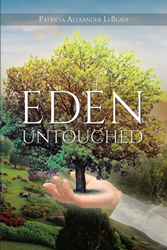 “Eden Untouched”: an extraordinary narrative that reimagines the story of Eden where Eve did not eat the fruit and the world became a world of Utopia, until a failed mission disrupted the beauty and caused destruction and chaos. “Eden Untouched” is the creation of published author Patricia Alexander LeBeauf, a writer who loves both encouraging and talking to people. She serves at the information center at her church, The Rock in Anaheim, California.
Patricia Alexander LeBeauf shares, “Imagine a world if Eve hadn’t eaten the fruit.
“Imagine a world of utopia.
“That’s the world Jedidiah lived in, and yet he still wasn’t completely happy. When Jedi gets fired again from his current job, his father decides to take a chance and hires him at the company where he works.
“It’s there where Jedi begins researching the many people who in the past have tried to enter where the tree of knowledge was securely being kept by both heavenly angels and devices made by man.
“Jedi took it upon himself to create a plan that would prevent anyone to gain entry to either security systems, so mankind would forever remain in a state of utopia.
“Follow Jedi on his adventure with his best friend Nine as his plan failed! Sin and chaos entered the world and how Jedi was given a chance for redemption to help bring order to a chaotic world!”

Published by Christian Faith Publishing, Patricia Alexander LeBeauf’s new book is an interesting saga where readers find an adventure in a mission of bringing back peace and redemption in a once-perfect world that was shaken to its core when sin found a way to barge in.

For additional information or inquiries about “Eden Untouched,” contact the Christian Faith Publishing media department at 866-554-0919.