“The Soldier and The Bear” from Christian Faith Publishing author Patricia DeGrace shares a poignant journey of her husband, who struggled with PTSD and MMD after his service in Operation Iraq Freedom after 9/11. 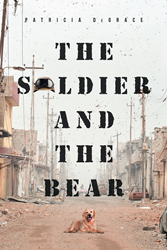 “The Soldier and The Bear”: a captivating read of a man’s journey in embracing life again and finding the hope and faith that were once lost. “The Soldier and The Bear” is the creation of published author Patricia DeGrace, a faithful believer in Christ. She is the wife of an Army Veteran who served during Operation Iraq Freedom. She is also the mother of two sons, John and Joshua and the Nana to six grandchildren.

DeGrace shares, “Mental illness and trauma often lead good people down a very dark road, but there is light at the end of the tunnel—and no, it’s not a train headed toward you.

“The story of The Soldier and the Bear is about one man’s battle with post-traumatic stress disorder and major depressive disorder and his journey back to hope and believing life is worth living again. With his newfound hope, he fights this psychological battle a little differently than he did before. He fights with a renewed strength that comes from a renewed mind. His weapon is no longer overmedicating or alcohol, and suicide is no longer an option. His weapons are now faith, hope, love, the Word of God, and a red golden retriever named Bear. He is no longer alone in the battle, and you don’t have to be either.

“We believe you and your loved one struggling with the same or similar mental illnesses will also find hope once again upon reading his story. The challenge set before you in acquiring this new life-changing hope is to read this book, seek out God, and determine yourself to take one day at a time with a renewed mind-set. One that simply says, ‘I am worth it,’ and ‘I won’t give up.’ It won’t happen overnight, but remember, baby steps are progress. Life is too valuable and precious to let it slip away.”

Published by Christian Faith Publishing, Patricia DeGrace’s new book is a beautiful account of a courageous man whose life was told in an aim to reach those who also face a similar situation—and that they, as well, may find their hope once again.

View a synopsis of “The Soldier and The Bear” on YouTube.

Consumers can purchase “The Soldier and The Bear” at traditional brick & mortar bookstores, or online at Amazon.com, Apple iTunes store, or Barnes and Noble.

For additional information or inquiries about “The Soldier and The Bear,” contact the Christian Faith Publishing media department at 866-554-0919.