Patrick J. Edwards’s newly released “The Emerald Tablet” is a thrilling narrative of a monk who was sent on a mission to find a famous relic with untold power

“The Emerald Tablet” from Christian Faith Publishing author Patrick J. Edwards is a captivating novel that will satisfy the reading experience of the readers as this book allows everyone to be engaged in the mission of a monk in finding the famous and powerful tablet with only a few clues and a conundrum. 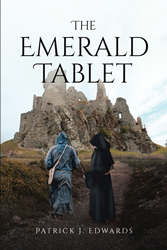 “The Emerald Tablet”: a fascinating book that tells a story of a man who is on a quest in pursuit of a famous relic with immense power. “The Emerald Tablet” is the creation of published author Patrick J. Edwards, a man who has worked many years performing research at IU Medical center and retired from Eli Lilly as a peptide chemist. Patrick was unable to publish this book during his lifetime, but fortunately, Theresa Patrick, his sister, was able to accomplish this task for her brother after his passing.

Edwards writes, “A medieval monk sent on a clandestine mission to find a fabled relic with untold power; a double cross with a foreign kingdom.

“Edward travels with his companion, a former Templar Knight, in search of the emerald tablet. More than one king wants the power that the legendary artifact has. With only a few clues and a riddle, Edward must solve the mystery if he is ever to return to his beloved monastery.”

Published by Christian Faith Publishing, Patrick Edwards’s new book is an enthralling masterpiece that will lead the readers to an impelling discovery of the emerald tablet, and how a monk will be able to return to his beloved cenobium.

With this book, Edwards takes the reader to an exciting discovery of a powerful and famous relic. This book will also thrill the readers as it leaves them a lingering question about how the monk can return to his cherished abbey

View a synopsis of “The Emerald Tablet” on YouTube.

Consumers can purchase “The Emerald Tablet” at traditional brick & mortar bookstores, or online at Amazon.com, Apple iTunes store, or Barnes and Noble.

For additional information or inquiries about “The Emerald Tablet,” contact the Christian Faith Publishing media department at 866-554-0919.