Young adult readers of science fiction will find much to enjoy in the Patrick Ullmer’s debut novel of the ‘Eternal Space’ series. 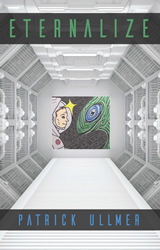 At a time when there's so much division in our country and our world, I suspect a story about a character’s rediscovery of his own humanity may have something relevant to say about the value of listening to and learning from those who are different from us.

Patrick Ullmer’s debut young adult science fiction novel, 'Eternalize' launches a planned three book series (Eternal Space) with a solid first installment. Packed with all the requisite adventure, suspense, and speculative future tech, this first book of the series offers more than post-apocalyptic nihilism that many have come to expect from contemporary offerings in the genre.

“In addition to writing a thrilling story, I wanted to infuse it with thoughtful and humanist themes, in a similar vein as some of the classic sci-fi writers, like Ray Bradbury, Richard Matheson, and C. S. Lewis,” says Ullmer.

'Eternalize' begins in the year 2886. as Bruno Redding awakens on a spaceship after 750 years in “cryosleep.” Out of twelve passengers, he is the lone survivor to come out of the hibernation alive. He finds himself picking up the pieces of a doomed voyage in the vast and lonely cosmos of deep space. Redding’s only company is the ship’s centralized artificial intelligence supercomputer. That is, until he discovers a benevolent alien aboard who communicates with him telepathically.

As Redding’s body slowly shakes off the slumber, unfolding events awaken him to the opportunity to make up for past mistakes. He sets out on a quest to liberate innocents from the clutches of a corrupt interplanetary regime. Along the way, he faces intergalactic space pirates, renegade robots, and other fiendish henchmen motivated by greed and control.

Ironically, it is largely through his contact with the friendly, good-natured, hitchhiking alien and its kin that Redding learns some of the deepest lessons about embracing his own humanity, and defending that of others.

“I hope the story and the entire series will challenge readers to ask the question, ‘What can I find in this universe that is missing in my life?’” says the author.

Ultimately, at the heart of 'Eternalize' lay eternal themes and values—heroism, self-sacrifice, the golden rule, and love.

A YA offering, the author identifies the audience as “older tweens to older teens.” 'Eternalize' avoids the profanity and sex often found in YA literature. It features innocent romance and a single mildly suggestive wisecrack. The novel contains much action, including swashbuckling fight scenes, which are perhaps best characterized as “cartoon violence,’ neither excessive nor overly graphic. Readers, young and old alike, will enjoy the frequent comic relief throughout, including nods to pop culture, film, television, social media, and celebrities.

“At a time when there's so much division in our country and our world,” says Ullmer, “I suspect a story about a character’s rediscovery of his own humanity through the contribution of otherworldly friends may have something relevant to say about the value of listening to and learning from those who are different from us.”

'Eternalize' is published in both paperback and eBook format by Free Flying Press, and is distributed by eBookIt.com. It is available at Amazon.com, Barnesandnoble.com, and other popular online retailers.

About Patrick Ullmer
Patrick Ullmer was born in Rock Springs, Wyoming in March of 1997. At a young age, his family moved to Minnesota where he attended both public and private school. His hobbies include drawing, fishing, and reading the news. He is currently seeking a future in the communication field of work.