Paul Moses Burrow Jr.’s newly released “Apollos: The Dark Age” is an amazing work of religious fantasy that envisions a world in desperate need of heroes and deliverance 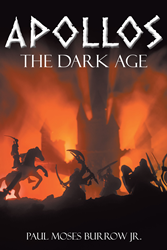 “Apollos: The Dark Age”: a gripping tale of courage, faith, and staunch determination to defend one’s own. “Apollos: The Dark Age” is the creation of published author Paul Moses Burrow Jr., a talented writer with an incredible imagination with which to create astonishing works of fantasy.

Burrow shares, “Like many empires whose borders were carved by the edge of the sword, so too—by the labor of war—was this empire born!

“In an age when the people of Mediterane forsook our gracious Lord and demons offered their powers to be used by the people of the land, an endless Goblin horde, led by their demon-possessed warlord, invades the realm. This demon, the awful Prince Kraten, is evil personified and unmatched in the arts of war; however, the greater the evil that seeks to devour the land, the greater the heroes who emerge to fight it. Join these courageous heroes in Apollos: The Dark Age as they dare to challenge the might of this Goblin horde, choosing rather to die defending their ramparts than live as subjects to this dark master.

“However, in such a time as war, there are other battles being fought in the realms of the supernatural…greater battles not seen by the eyes of men. Standing with our heroes are their angelic allies locked in a fantastic struggle against their dark and sinister counterparts as each side wields dynamic powers one could only describe as magic.

“In the middle of this swirling tempest of chaos stands Apollos, struggling to follow God’s will in the midst of wizardry and war with his guardian angel, Mythose, determined to defend him to the bitter end.

“Apollos: The Dark Ages reveals the truth about magic and casts light on the awesome power of God as He uses one Christian to break evil’s hold on an empire.
“Can one Christian truly make a difference?”

Published by Christian Faith Publishing, Paul Moses Burrow Jr.’s new book is an imaginative take on what it may be like to peek behind the curtain and actually see what was previously invisible.

View a synopsis of “Apollos: The Dark Age” on YouTube.

Consumers can purchase “Apollos: The Dark Age” at traditional brick & mortar bookstores, or online at Amazon.com, Apple iTunes store, or Barnes and Noble.

For additional information or inquiries about “Apollos: The Dark Age,” contact the Christian Faith Publishing media department at 866-554-0919.