Paws of War helps soldiers save pets they rescued while being deployed. 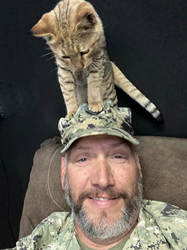 Photo courtesy of Paws of War

Right now, we are on a mission to pull off a holiday miracle by helping to save a sailors rescued cat and get him back to New England, explains Derek Cartwright, a veteran and the coordinator for Paws of War. We can do it, but only with the support of those in the community.

Everyone who has ever had a pet knows how special of a bond it can be. Pets are notorious for helping us to have a better quality of life. The same holds for U.S. military who are stationed overseas. Sometimes they befriend an animal they rescue, creating an incredible bond that helps them get through that time away from their family. When the deployment is over, they either need to walk away from the animal, which may lead to their death, or they need help relocating them back to the soldier’s home in America. That’s where Paws of War comes in.

"Right now, we are on a mission to pull off a holiday miracle by helping to save a sailor's rescued cat and get him back to New England," explains Derek Cartwright, a veteran and the coordinator for Paws of War. "We can do it, but only with the support of those in the community.”

When Davids, a sailor in the U.S. Navy stationed in the Middle East, heard he would be deploying back to the states, he worried about what would happen to Vinny. He rescued the cat and became family with him, bonding and spending their days together. They would go everywhere together, and he knows that leaving Vinny behind while he heads back home will be a death sentence for the young cat.

“If I have to leave without Vinny, they most likely will exterminate him, and that is something I cannot bear to let happen,” explains Davids. “I'm hoping Paws of War can help my best buddy Vinny and me so I can give him a wonderful life. I appreciate anyone helping to save his life and get him home where my family and I will love him forever."

Davids is a sailor in the U.S. Navy and has served for over 20 years, including having done five combat tours overseas. He is currently in the Middle East. Bringing his best friend, Vinny, home with him is a mission that he feels will be a holiday miracle if it's pulled off. The two are attached at the hip, and he thinks that by getting Vinny to Massachusetts to be with him and his wife, he will have a great life and become a New England Patriots fan.

The Paws of War rescue team has a plan in place but needs the community's support to make it happen. Such missions involve many resources, making them a costly endeavor.

To donate and help rescue Vinny to New England, visit the site:
https://pawsofwar.networkforgood.com/projects/180771-help-save-vinny

Paws of War has been operating worldwide since 2014, helping the military save the animals they rescue while deployed overseas. They have helped veterans with numerous issues, including suicide prevention, service, and support dogs, companion cats and dogs, food insecurity, veterinary care, etc.Paws of War has a large loyal following of supporters and looks forward to working with new corporate sponsors to support these life-saving programs. To donate, visit its site at: http://pawsofwar.org.

About Paws of War
Paws of War is a nonprofit 501(c)(3) charitable organization that assists military members and their pets, rescues and trains dogs to be service dogs, and provides companion animals to veterans. To learn more about Paws of War and the programs provided or donate, visit its site at: http://pawsofwar.org.

Photo courtesy of Paws of War