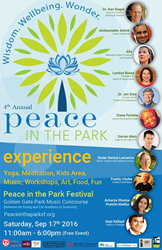 Each year, people tell me they feel a buzz of positive energy created by the powerful gathering. There is something about the unity of purpose that’s tangible. This has the potential to change the trajectory of your life. - Jay Chodagam, Event Producer

This year the event will feature Dr. Daniel Siegel, an internationally acclaimed author, award-winning educator and a Clinical Professor of Psychiatry at the UCLA School of Medicine. He is also co-director of the Mindful Awareness Research Center. He is the Executive Director of the Mindsight Institute, an educational center devoted to promoting insight, compassion, and empathy in individuals, families, institutions and communities.

The festival was created in response to the growing levels of stress which can manifest in ways that are damaging to our communities. As such, the event intends to demonstrate how to nurture peace even while living in a fast-paced urban environment. The event is offered free of charge in partnership with the Brahma Kumaris Meditation Center, Peaceful World Foundation, United Religions Initiative, Green Festivals and several other peace-oriented organizations.

The event is co-produced by Brahma Kumaris instructor and TEDx speaker, Jay Chodagam. Jay advocates, through his own life, the importance of slowing down; a topic which he presented at his 2013 “Being Before Doing” TEDx talk. He has held workshops on stress management and meditation at Google, Gap Inc., PG&E, Dell, Barclays, Infosys, TCS, Amdocs, Hetero Drugs, San Joaquin Hospital, San Francisco County Jail and universities, including Stanford, Hawaii, San Diego State, Portland State, Alaska and Wasilla High School. He has organized workshops in nine countries outside the US.

“Each year, people tell me they feel a buzz of positive energy that’s created by the powerful gathering which envelops the entire venue. I’ve heard this from 8 year olds and 80 year olds. There is something about the unity of purpose that’s tangible. This has the potential to change the trajectory of your life,” states event producer, Jay Chodagam.

"At Peace in the Park the world comes together for a day of living and interacting in a way we wish for the whole world, the way of peace. For those of us that work daily for peace, justice and healing for the world, Peace in the Park gives us a glimpse of the way the world might be," states the Rev. Victor H. Kazanjian Jr., Executive Director of United Religions Initiative; longtime Peace in the Park event partner and sponsor.

The festival’s impact is having a positive effect towards actively contributing to peace and social conscious initiatives in San Francisco and the greater Bay Area. Since 2013, the festival’s attendance has doubled in size each year and has spread to three other cities; with an expected attendance of 10,000 visitors in 2016. The Peace in the Park platform is also growing globally; with New York NY, Oxford UK, Amsterdam NL, Miami FL and Trinidad realizing the value and benefits of this yearly venue and movement.

The event is volunteer-based and relies on donations to keep the event free for participants. A crowdfunding campaign has been created to raise funds, featuring a range of perks such as meditation music, festival tickets, t-shirt and signed books from famous authors. To view and donate to the campaign, go to: https://igg.me/at/lpMT8EmDDOA.

For the Facebook page event, go to: https://www.facebook.com/events/620095384832701/.
To learn how to volunteer for the event, contact Koundinya at volunteer(at)peaceintheparksf(dot)org.

About Peace in The Park:
Peace in the Park was first hosted in 2013 as one-time event by the Brahma Kumaris and their friends from over 30 years in the Bay Area. Following the astounding success, people wanted it to become an annual festival. The Brahma Kumaris teach meditation techniques to enter into a natural state of calm on a daily basis; enhancing our ability to think more deeply, and feel greater empathy and live out our values in more authentic ways. Daily calm, clear thinking and value-based living can all positively impact our career path, relationship and well-being. The free event is run by ethnically diverse, multigenerational groups of trained volunteers in 9000 locations around the world, committed to bringing peace and creating a space for positive social change right in the heart of communities.

About Jay Chodagam:
Janardhan Chodagam, MS, is a Software Specialist, Spiritual Enthusiast, and personal development expert and trainer with the Brahma Kumaris. His many years of researching meditation techniques led him to become a proponent of mindfulness training for people of all ages and backgrounds to identify their purpose and enhance their sense of self-worth. Jay co-produces the annual SPIRIT Summit in India and Peace in the Park festival in San Francisco. He also regularly conducts workshops and seminars at the Anubhuti Retreat Center in Marin County (California), and weekly meditation MeetUp in San Francisco.