Submissions are open for this prestigious film award 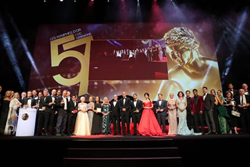 SUBMISSIONS
Participation is open to all filmmakers, production companies, and television studios. Submissions are now open until April 2, 2020. The full rules and procedures can be found at http://www.peacejam.org/jury-award-rules

The PeaceJam Foundation is an award-winning peace education program established in 1996. More than 1.2 million young people have participated in the program, from 40 countries around the world.