Supporting LGBTQ communities across the country, Peanut Butter & Co. will donate more than 36 thousand pounds of peanut butter over the next 12 months 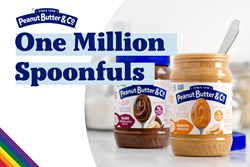 "We hope One Million Spoonfuls inspires other brands and companies to take action and provide assistance wherever they’re able." -Lee Zalben

Peanut Butter & Co., the family-owned peanut butter brand available at more than 15,000 stores nationwide, announces a new effort to support food-insecure LGBTQ communities across the country by donating One Million Spoonfuls of peanut butter to food banks. As an NGLCC certified LGBTQ-owned company, Peanut Butter & Co. will distribute the 36 thousand pounds of peanut butter to food banks in more than 12 cities nationwide to support food-insecure communities across the country.

Peanut Butter & Co. Founder & CEO Lee Zalben was inspired to create the One Million Spoonfuls campaign after reading a 2020 study by UCLA’s Williams Institute, which found that food insecurity among LGBTQ people is twice as high as the national average. A conversation with Bianca Wilson, the author of the Williams Institute study, helped guide the strategy and ensure Peanut Butter & Co’s resources are being used effectively.

“LGBTQ people seeking access to food are largely using the existing network of public food banks, so we are donating to a combination of larger food banks serving the general public as well as smaller pantries that focus on the LGBTQ communities,” said Zalben. “The peanut butter we’re donating is for all people, regardless of how they identify, and we’re prioritizing larger food banks that have a proven track record of working with the LGBTQ community. We hope One Million Spoonfuls inspires other brands and companies to take action and provide assistance wherever they’re able.”

Peanut Butter & Co. will continue its journey across the United States, sending peanut butter to several food banks over the next year. To follow along on the trip, and see the delicious, local creations, follow Peanut Butter & Co. on Instagram.