A real-life David and Goliath story ends with a victory for Alaskan Native Tribes, wild salmon and all Americans striving to Save What They Love 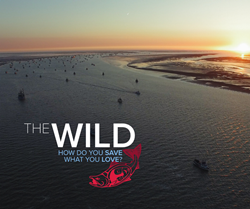 “This is a hard-fought hard-won victory for the people of Bristol Bay” said Titus. “The Indigenous people who have relied on wild salmon for 4,000+ years and every American who easts this completely regenerative food source benefits from it.”

The U.S. Army Corps of Engineers just denied the long-debated Pebble Mine a permit to proceed with construction in Bristol Bay, Alaska. Alaskan tribes, conservationists and American sportsmen and women celebrate long-fought for victory for the last fully-intact wild salmon runs on the planet. The Wild is an award-winning documentary that depicts this battle and will be screening live on December 3rd 4pm Pacific / 7pm Eastern - followed by interactive discussions exploring how to “save what you love.”

The Pebble Mine would have been North America’s largest open-pit copper and gold mine and would have been situated at the headwaters of the pristine Bristol Bay, Alaska, threatening a 4,000-year-old way of life, a consistent job for more than 14,000 people and a sustainable food source for nearly half of the globe.

THE WILD, the latest passion project by acclaimed Seattle film director Mark Titus, deals directly with the Pebble Mine battle and how the last fully intact wild salmon run in the world hung in the balance. Titus spent 3 years working with Bristol Bay salmon processors during the early 90s and as a sport-fishing guide in Southeast Alaska during his 20s. The film illustrates what’s at stake with saving this last wild place Titus loves, through his own battle with addiction and ultimate victory into sobriety.

The screening of this film will be followed by a live Q&A with Titus, luminaries from the film and fellow filmmaker, Steve Ellington – one of the principal forces behind the Environmental Investigative Agency’s (EIA) release of the so-called Pebble Tapes which influenced today’s outcome.

“This is a hard-fought hard-won victory for the people of Bristol Bay” said Titus. “The Indigenous people who have relied on wild salmon for 4,000+ years and every American who easts this completely regenerative food source benefits from it. We have taken a large step forward in saving what we love, together.”

The virtual event next Thursday will provide education and further elevate the voices across the U.S. and Canada who oppose Pebble Mine, which include some of the largest financial, environmental and outdoor sporting groups in North America, such as Orvis, Tiffany & Co., The Natural Resource Defense Council, National Wildlife Federation, Alaska Wilderness League and Trout Unlimited.

Save what you love. Go to: http://www.evaswild.com. Follow @thewildfilm on social. The Wild is available to rent right now at https://thewildvirtualtour.vhx.tv/products/the-wild-save-what-you-love

25% of net ticket sales from the 12.03.20 event will be donated to the coalition who worked for decades to save Bristol Bay.

Ticket price is valued at $12 but will be sold on a sliding scale so anyone may attend the event. Free tickets are available.

Eva’s Wild is an impact brand curating authentic storytelling that reveres the wild in ourselves and on our planet.