A recent study by PsychTests.com indicates that people who display narcissistic tendencies may do so in order to mask a low sense of self-worth, and desperate need for validation. 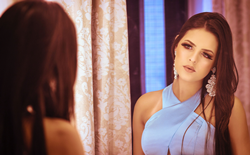 Behind a narcissist’s sense of grandiosity is a fragile and sensitive ego.

Narcissists are desperate to keep up their façade of superiority, because they don’t want to face the fact that deep down, they feel empty.

Narcissists’ confidence may seem unbreakable, but behind the arrogant bluff and know-it-all attitude lies a deep-seated vulnerability, according to a study conducted by PsychTests. In spite of their bluster and bravado, narcissists are petrified of having their weaknesses exposed, including their lack of self-love, their fear of rejection, and their hyper-sensitivity to criticism.

Analyzing data from 13,999 people who took the Self-Esteem Test, PsychTests’ researchers compared the attitudes, feelings, and behaviors of narcissists to non-narcissists. Here’s what they uncovered:

“Narcissists will go to great lengths to keep up appearances,” explains Dr. Jerabek, president of PsychTests. “You will often see this behavior in celebrities who display narcissistic tendencies: They dress to impress, undergo cosmetic surgery or do other extreme things to change their appearance. They constantly promote themselves on social media, do outlandish things to draw admiration and attention, and are dismissive of people who they think are beneath them. This satiates their ego for a little while, but it’s a vicious circle, because the ugly truth will come to the surface again: The belief that they are unworthy, unloved, and meaningless. Narcissists are desperate to keep up their façade of superiority, because they don’t want to face the fact that deep down, they feel empty. Some narcissists are really good at hiding their vulnerabilities, even to the point of delusion, but the mask will come off eventually, and they will be shown for who they really are: Fearful of rejection, sensitive, and severely lacking in self-love.”

“To counter their sense of vulnerability, narcissists tear down other people with constant jibes, pettiness, projection, and gas-lighting. They can wreak havoc in personal relationships and in the workplace, especially if they are in a managerial role. As leaders, they engage in territoriality, set impossible standards, and rule by fear. As employees, they are un-coachable and unwilling to admit their shortcomings. It’s important to also understand that narcissism falls on a spectrum - some people are full-blown, others just have some tendencies. However, whatever the case, they are difficult to collaborate with, to like, or to love. Some narcissists can be helped by undergoing therapy, but few seek help, and even if they do, they are quite resistant. The best defense against a narcissist is to learn to spot them. In order to protect your own sense of self, don’t internalize their assaults on your character, don’t engage in their mind games, and if you’re a manager, don’t let them get away with bullying or harassment.”

Want to assess your self-esteem? Check out our Self-Esteem Test at https://testyourself.psychtests.com/testid/3102

Narcissists may crow about how amazing they are, but deep down, they are not as confident as they appear to be.Here’s where narcissists and non-narcissists differ: