Adams Arms President, Jason East compares the notion of holding automakers accountable for accidents caused by reckless drivers to recent legislative attempts which would hold firearms manufacturers accountable for the mindset of gun purchasers and any violence they create. He claims that two bills would place responsibility for preventing the use of its products in crimes on the firearms industry, but in reality, are simple malfeasance on the part of elected officials who don’t apply the same principles on American automakers whose cars become deadly weapons in accidents. 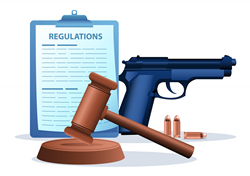 The two bills would make the firearms industry take responsibility for preventing the use of its products in crimes by reading the minds of all purchasers and penalize them financially but in reality, they are simple malfeasance on the part of elected officials

Motor vehicles become deadly weapons at the hands of reckless drivers, placing them among the most dangerous products sold anywhere and pose a larger risk of accidental death than anything except opioids. Since 2016 the number of auto crash deaths peaked at roughly 40,000 per year and remains at that level, according to the National Highway Traffic Safety Administration. (1) The notion to hold car manufacturers accountable for accidents caused by reckless driving would leave U.S. citizens scratching their heads, but that analogy is exactly what firearms manufacturers will face if two new bills introduced by anti-gun influencers in the 117th Congress this year are passed according to Adams Arms President, Jason East. “The two bills would make the firearms industry take responsibility for preventing the use of its products in crimes by reading the minds of all purchasers and penalize them financially but in reality, they are simple malfeasance on the part of elected officials,” maintains East.

The Firearm Industry Crime and Trafficking Accountability Act (H.R. 8740) would require every firearm manufacturer to create a monitoring system to track crimes committed with guns they have sold, using ATF gun trace data. The bill empowers the ATF to impose meaningful financial penalties on firearms manufacturers that continue to ignore gun crime and supply bad-actor dealers. (2)

Another bill is the Firearm Industry Fairness Act, (H.R. 8741) which would impose a 20% tax on the total revenue for manufacturers who make assault weapons and high-capacity magazines. The tax would be levied on the total revenues of the manufacturer; not just the sales of the semiautomatic and high-capacity magazine firearms. (2)

In 2021 the firearm and ammunition industry paid over $7.85 billion in business taxes, including property, income and sales-based levies in 2021. They also paid an additional $1.1 billion in federal excise taxes, directly contributing to wildlife conservation. “The economic contributions of our industry are indisputably contributing to every state and every community.” said Joe Bartozzi, NSSF President and CEO. “The growth of firearm and ammunition manufacturing year-after-year shows that this industry continues to meet the American demand for lawful firearm ownership.” (3)

East feels the taxes already levied on manufacturers is sufficient and fair. He asks, “What would happen if we apply the same potential guideline to auto crashes that some anti-gun activists want to apply to firearms?” He notes that if you look at the proposed taxes to be levied, you’ll see a trickle-down effect that citizens will not stand for. “The 20% tax addition would be paid by the automaker, but the cost would then pass to dealers who would in turn pass it on to consumers. The consumer would end up paying for other drivers’ accidents nationwide,” said East. Based on 2020 data it could be $3.8 billion divided amongst all affected manufacturers that would trickle its way onto sticker prices. (4)

Established, legal firearms manufacturers don’t know the psychological mindset of consumers any more than automakers investigate consumers purchasing a new car. East continues “A dangerous precedent would be set if government follows misguided legislation ─ that forces a manufacturer to track and monitor some of their purchasers to the ATF, taxes a company’s total revenues and not just the products they wish to control and empowers the ATF to penalize a company if they don’t recognize dealers that they consider ‘bad actors’”.

Setting an example of quality and ethics, for years Adams Arms has been a trusted source of reliable firearms for the U.S. military and law enforcement in addition to sports enthusiasts. Adams Arms has offered a patented Piston-Driven system that is cleaner, cooler, and more reliable for use. “Our AR-15 piston system, historically a favorite of law enforcement, is seen for its technical merit and reliability. In addition, Adams Arms has developed a backpack with folding AR-15 stock customized for School Resource Officers in protection of children in America’s schools. In short, Adams Arms is there when it counts the most, which helps all users feel safe and in control,” remarks East.

Using the analogy to the proposed legislation moving through Congress presently, he warns the 275,924,442 vehicle owners in the U.S. and the automakers that our government could be monitoring their actions to potentially charge the manufacturer of their car, which will ultimately be passed along to them ─ all based on the potential for accidents across the U.S. (5) A dream sequence? Perhaps. But, if the government does pass legislation to force firearms manufacturers to know the mindset of purchasers and supply details of all dealers who “might” sell a gun to a questionable buyer and tax them on a total revenue base, then the automotive industry is not far behind on their radar. “And that would be a nightmare for U.S. citizens,” warns East.