The December 2020 completion of Fort Wayne’s (IN) Rudisill Consolidation Sewer will help the city prevent further pollution of the St. Mary’s River due to unpredictable sewer overflow events. PENETRON ADMIX SB was specified to ensure a durable and waterproof concrete structure for the consolidation sewer. 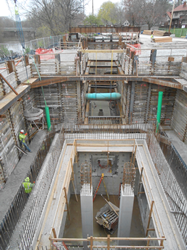 Big clean up: The massive concrete structures of the new Rudisill Consolidation Sewer deep under the intersection in Fort Wayne will prevent future CSOs from polluting nearby rivers.

With PENETRON ADMIX SB, the ease of dosing one pre-measured soluble bag per cubic yard of concrete simplifies the mixing procedure.

The December 2020 completion of Fort Wayne’s (IN) Rudisill Consolidation Sewer will help the city prevent further pollution of the St. Mary’s River due to unpredictable sewer overflow events. PENETRON ADMIX SB was specified to ensure a durable and waterproof concrete structure for the consolidation sewer.

Located in northeastern Indiana, Fort Wayne is the second-largest city in the state, with over 270,000 inhabitants. Situated at the confluence of the St. Joseph, St. Mary’s, and Maumee rivers, the city was initially established as a trading post for pioneers in the late 18th century and has grown into a center for the healthcare and defense industries.

The newly completed Rudisill Consolidation Sewer is a near-surface sewer that captures combined sewage and stormwater overflow. The completion of this $6 million project is part of the City Utilities’ 18-year Long Term Control Plan and an essential effort to better control combined sewer overflow events (CSOs), which occur during wet weather storms approximately 72 times a year in the Fort Wayne area.

Keeping Sewage Out of the River
“Previously, the city’s below-grade sewer pipe system dumped an annual average of 392 million gallons of combined sewage into the St. Mary’s River,” says Christopher Chen, Director of the Penetron Group. “The Rudisill Consolidation Sewer is an essential part of the overall effort to clean up the region’s three rivers and stop the release of untreated water into the environment.”

Built deep under the intersection of Broadway and West Rudisill Boulevard in close proximity to the St. Mary’s River (and approx. one mile south of downtown Fort Wayne), the new consolidation sewer takes the CSO from two pipes that previously dumped directly into the river and conveys the overflow to a drop shaft connected to the Three Rivers Protection and Overflow Reduction Tunnel* (3RPORT), which transports the CSO to the wastewater treatment plant.

During the early stages of planning, the DLZ Engineering team responsible for the design of the Rudisill Consolidation Sewer tapped Penetron for a proposal that would ensure waterproof and durable below-grade concrete structures. PENETRON ADMIX SB was ultimately specified to treat approximately 1,600 cubic yards of concrete, which was supplied by Irving Materials Inc. (IMI).

“The concrete structures of the new consolidation sewer are massive,” adds Christopher Chen. “The bottom slab is three feet (91 cm) thick and the walls are 40 inches (>1 m) thick.”

Making Concrete Impermeable to Moisture
Added to the concrete mix at the time of batching, PENETRON ADMIX SB reacts with moisture in the concrete to form an insoluble network of crystals that fill the cracks, pores and voids. This process takes place throughout the concrete matrix, making it impermeable to moisture and other elements and chemicals often found in untreated sewage that would typically cause concrete deterioration.