Penetron Helps the Swiss Railway Tunnel Through the Alps 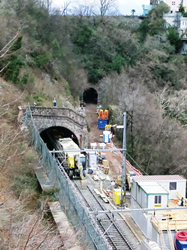 Joining the “4 meter corridor”: Enlarging the Paradiso Tunnel, part of the important Gotthard rail artery through Switzerland, allows the transit of standardized freight containers by train.

The tests performed by the IMM labs confirmed that adding PENETRON ADMIX to the shotcrete mixture improves durability and impermeability of the concrete matrix.

In operation since 1874, the dimensions of the Paradiso Tunnel (757 m/2,500 feet long) did not allow the four-meter (13 feet) corner height needed to accommodate the standardized freight containers that are transported by rail across Europe. The double-track railway tunnel connects the Swiss municipalities of Paradiso and Lugano (Canton Ticino) and is a key part of the Gotthard Pass transport artery that cuts through the Swiss Alps to connect countries in northern Europe with the Mediterranean region.

Updating and enlarging the Paradiso Tunnel is an important component of Switzerland's transport policy – to increase the switch of international freight traffic from the road to the rails by allowing rail transit of standardized containers. To realize a four-meter corridor along the entire length of the Gotthard route, about 20 tunnels are currently being enlarged (along with alterations to platforms, traction current systems, signaling installations and overpasses) by the Swiss Federal Railways (SBB).

Looking for an Improved Shotcrete Mix
The SBB realized that the project needed an improved shotcrete mix to ensure impermeable and durable tunnel walls for all the tunnels along the Gotthard rail line. The Meccanica dei Materiali (IMM), a Swiss materials technology laboratory, was commissioned by the SBB to analyze and propose a solution that would also integrate self-healing capabilities for the resulting concrete structures.

In the search for a robust waterproofing solution, the IMM experts subjected samples of both PENETRON ADMIX-treated and untreated concrete to extensive lab tests:

Providing Self-Healing Capabilities
These tests analyzed self-healing capabilities (through continuous flow measurement tests and microscopic analysis of the concrete samples) to verify both impermeability and durability characteristics (according to SIA 262/1 standards) under the high hydrostatic conditions of a subterranean tunnel. The test results showed that adding PENETRON ADMIX to concrete enabled the concrete matrix to seal cracks up to 0.5 mm, without adversely effecting any other concrete properties. Chloride diffusion and the carbonation coefficient (under cyclical dry/wet test conditions) were also improved.

Sealing Tunnel Walls
Construction work began in late 2018 and was completed in late 2021. The main construction phase of the new, taller Paradiso Tunnel was the application of the PENETRON ADMIX-treated shotcrete proposed to the SBB engineers by IMM and Penetron Italia. Once sprayed on the tunnel wall superstructure, it prevented any water infiltration from the backfill side.

“The tests performed by the IMM labs confirmed that adding PENETRON ADMIX to the shotcrete mixture improves durability and impermeability of the concrete matrix,” concludes Enricomaria Brac. “PENETRON ADMIX also provided the concrete with the ability to self-heal and seal cracks up to 0.5 mm wide, which is possible only with a hydrophilic permeability-reducing admixture like PENETRON ADMIX.”

Spray it on and forget it: Adding PENETRON ADMIX to the shotcrete for the Paradiso Tunnel enables the concrete matrix to seal cracks up to 0.5 mm, without effecting any other concrete properties.