Pennhurst, A New Documentary Chronicles One Of the Worst Cases Of Institutionalized Abuse Of The Disabled

Available on iTunes March 26 - This is the true story behind the horror stories, and it is far more terrifying 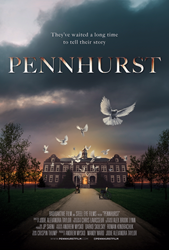 Pennhurst, a groundbreaking documentary chronicling perhaps the worst case of institutional abuse of disabled people in U.S. history will be released on Apple iTunes on March 26, 2019. The film follows the stories of former Pennhurst residents who relate their tales of abuse and survival against devastating odds. A visit to the former institution, interviews with former residents, staff, advocates and lawyers are also included in this feature length film. These courageous stories need to be heard, as the voices of the 70 million disabled Americans are so often ignored.

These real stories reveal the simultaneous horror and refuge experienced by many through the course of the institution's history. They uncover the atrocities of our past, but also give light to the future.

Pennhurst State School for the Feeble-Minded and Epileptic opened in 1908, and quickly became overcrowded. At its peak, it housed 3,000 residents with only 600 staff, who were often incapable to meet even the basic needs of the residents. Pennhurst residents operated on widely varying levels of ability. Though many could not leave their beds, hundreds of Pennhurst residents merely had speech impediments or occasional seizures. Because the institution was so severely understaffed, capable residents were made to mop floors, wash clothes, and even bathe other residents who had died and carry them to the morgue. These residents could have worked elsewhere in society, rather than be forced to do the dirty work of the institution. With the proper education and support, a majority of the residents at Pennhurst could have lived independent and autonomous lives.

“We made this film to draw attention to the treatment of people with disabilities,” states Director Jodie Alexandra Taylor. “Institutions like Pennhurst prevent autonomy and perpetuate negative stereotypes for people with disabilities. They create the false perception that people with disabilities are incapable or unworthy of participating in society at large. When, in fact, the exact opposite is true, former residents of Pennhurst exhibit the epitome of human resilience, exemplify the ability to overcome and freely forgive the atrocities of the past, qualities we should all celebrate. If nothing else is taken away from our documentary, we hope this lesson is: Kindness and compassion toward people with disabilities will lead us all to a richer, more vibrant community.”

The story of Pennhurst poses a clear and present danger in our current political climate. Repealing or cutting funding for national healthcare would leave millions of Americans with disabilities without coverage. Many people with disabilities rely on Medicaid for in-home services that allow them to live independently. Without a form of national healthcare, institutions like Pennhurst will become as much a part of our future as they are of our past and present. We must face this issue now!

Pennhurst is directed and produced by Jodie Alexandra Taylor, produced by Mandy Ward, and executive produced by Andrew Mysko. The film runs 82 Minutes and will be available on iTunes on March 26, 2019.