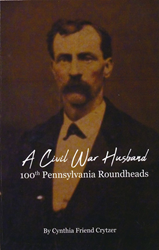 Cynthia Friend Crytzer never knew war letters existed from Thomas D. Nelson, her great-great-grandfather and Union soldier of the American Civil War, until she heard about them at a family reunion. An enthusiast of genealogy and history, Crytzer immediately took interest in the letters, leading her to publish and transcribe them for clarity and to share them with her family and those interested in the life of a Civil War soldier.

Released nationally today, "A Civil War Husband" features copies of Nelson’s original letters to his wife, Lydia Jane Fury Nelson, with Crytzer’s accompanying transcriptions. They follow the soldier’s journey from Plain Grove, Lawrence County, Pennsylvania through the Washington, DC area, South Carolina, Kentucky, and Vicksburg, Miss., before he was captured and sent to Andersonville Prison, where he died in the fall of 1864. Spanning from 1861-1864, the letters document Nelson’s life as a soldier of the “Roundheads,” 100th Pennsylvania regiment through stories of the people, places, and experiences he encountered along the way.

“While I wanted to publish these letters as a legacy for my family, I think anyone interested in the Civil War would enjoy them,” said Crytzer. “I really liked reading about Thomas’ descriptions of everyday things, such as camp life, food, prices, as well as his observations on other soldiers, slaves, and prayer meetings.”

In addition to the letters and transcriptions, "A Civil War Husband" also documents what happened to Nelson’s wife and their five daughters, including Crytzer’s great-grandmother, during the war and after his death.

“My heart really went out to Lydia Jane, because she was not able to care for her daughters due to financial burden and was forced to send them to Soldiers’ Orphan Schools in Mercer and Phillipsburg, Pa.,” noted Crytzer. “It must have been hard being a widow of the Civil War.”

The 146-page A Civil War Husband is available for purchase for $14.95 at http://www.civilwarhusband.com. The book is also available on Amazon at https://amzn.to/3aEwKcl.

About the Author
Cindy Friend Crytzer is a former educator, event planner, and proud mother and grandmother living in Mercer, Pa. She has volunteered with the Mercer Area Library and Historical Society and enjoys transcribing documents for the Library of Congress in her spare time.

*Book Copies and Interview Opportunities Available for Members of the Media.