Pere Ortis’ newly released “The Uncertain Footprint” is a reverent examination of natural passions and celibacy within the clergy.

“The Uncertain Footprint” from Christian Faith Publishing author Pere Ortis is a unique assessment of long-established standards within the ecclesiastical field from an objectively psychological point of view. 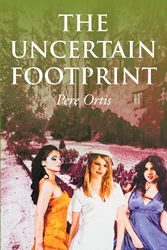 Pere writes, “The Uncertain Footprint is not a religious novel, in spite of using ecclesiastic elements, a monastery, some monks, a chapel, but is a deeply human novel since men and women are its protagonists acting according to their natural passions and virtues. Making a vivid analysis of the personages, the author debates the subject of the celibacy of the clergy with a very sincere objectivity. It contains a surprising action because of its veracity and psychological truculence, both moral and emotional. The subject is debated with the nudity of the fight at the bottom of each conscience, with truly human elements as it corresponds to the gender of the novel, without any concessions to the scruples, to the hypocrisy, and with the full visceral implication of the case. It’s a naked appearance in the surface of the recondite magma of emotional, pathologic problems, of ascetic achievements, of elementary frustrations, of forced happiness, and of not confessed desertion, or of confessed desertion of those who walk following an uncertain footprint and leaving it behind them—let alone nowadays under the signs of the time. At the bottom of it palpitates the anxiety for new ways, the thirst for the truth instead of the sophisticated law, the respect for the natural law above the inhuman habit. Everything happens within the calm climate of the American coenobium and in the feminine and exiting softness of the tropics. Yet the final valuing of the woman being present in the background, that leads to the prestige of her dimensions of spirit and of flesh, so despised so far, while the loss of them causes frustration in the integral man. With the end hanging upon the hollow, hanging on the air, under the painful doubt whether the correct step is followed, the one that the saints follow, with the mind always open to the God’s research, to the man’s research, to the truth research.”

Published by Christian Faith Publishing, Pere Ortis’ new book offers readers a substantial amount to consider regarding the sometimes-contested tradition of abstinence amongst the clergy.

With comparisons between how men and women are affected by this way of life, this account is thought provoking from start to finish.

View a synopsis of “The Uncertain Footprint” on YouTube.

Consumers can purchase “The Uncertain Footprint” at traditional brick & mortar bookstores, or online at Amazon.com, Apple iTunes store, or Barnes and Noble.

For additional information or inquiries about “The Uncertain Footprint”, contact the Christian Faith Publishing media department at 866-554-0919.