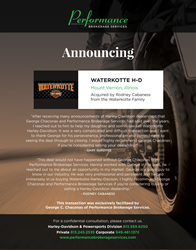 Rodney’s lifelong dream of owning a Harley-Davidson dealership became a reality in 2007 when he acquired Campbell’s Harley-Davidson from Ms. Linda Campbell, later renamed Black Diamond Harley-Davidson. Rodney Cabaness owns and operates Black Diamond Harley-Davidson in Marion, Illinois, only 40 miles away from Waterkotte Harley-Davidson. This made for a perfect strategic acquisition to expand their footprint. Rodney Cabaness shared, “This deal would not have happened without the involvement of George Chaconas from Performance Brokerage Services. Having worked with George in the past, he reached out to me about an opportunity in my market. George is a good guy to know in our industry. He was very professional and persistent and helped immensely in us buying Waterkotte Harley-Davison.”

George C. Chaconas, the exclusive agent for this transaction and the head of the National Harley-Davidson and Powersports Division for Performance Brokerage Services commented, “It was a pleasure working with the Surdyke and Waterkotte families and wish them luck on their future business endeavors. I wish Rodney Cabaness much success with his strategic acquisition.”

The company offers a different approach to the automotive, Harley-Davidson and Powersports industries by providing complimentary dealership assessments, no upfront fees, no reimbursement of costs and is paid a success fee only. Performance Brokerage Services gets paid only after the client gets paid.