“Three One Act Plays” from Christian Faith Publishing author Peter Routis is a well-written compendium of play scripts depicting the stories of two of God’s servants and himself in their moments of faith and gloriousness. 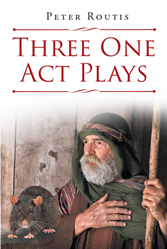 “Three One Act Plays”: an enriching account that contains plays about two biblical handmaids of God and one involving the end of days that is filled with reflection. “Three One Act Plays” is the creation of published author Peter Routis, a prolific playwright from Newmarket, Ontario.

Routis shares, “When the Prince of Darkness decides to destroy Job, the curtain on his life and that of his family will be drawn. Although a loyal servant to God, Job finds peace with himself and his God after his destruction, where he finally finds his place in heaven. The ‘Tragedy of Job’ captivates the audience with the brilliant, elegant, and compelling dialogues and soliloquies, which bring to life this biblical tragedy.

“Eli, a Jewish high priest, one of the last Israelite judges before the rule of kings, lived his life serving God at the tabernacle in Shiloh. He took under his wings Samuel, who succeeded him as the last Israelite judge. His end comes at the age of ninety-eight, when he learned, blind now, that his sons were killed by the Philistines, the Ark of the Covent was captured, and his daughter-in-law dies while giving birth to a son. With captivating dialogues and soliloquies, the drama of Eli underlines one of the most heartbreaking tragedies of the biblical era.

“When the earth is destroyed due to climate change, there are two lonely souls who meet at the side of a mountain, trying to make sense out of this. The Old Man who has spent his life searching for the truth, desperation takes over him: ‘Someone said that darkness hides…the truth. And someone else said that…darkness is everywhere.’ But there is hope as long as the sun rises every morning and the stars shine above the ruins of civilization. But hope always comes after hopeless moments: ‘I thought you mocked me the other night. I thought you would never appear again. But there you are. Is that a hope? It can’t be. But again…what kind of a hope…when everything is…hopeless.’”

Published by Christian Faith Publishing, Peter Routis’s new book is a powerful gem that reminds readers of God’s grace and mercy in times of sorrow and doubt in life.

This composition perfectly captures the essence of the Bible by vividly bringing selected faith-driven narratives to life with heartfelt profoundness and passion.

View the synopsis of “Three One Act Plays” on YouTube.

Consumers can purchase “Three One Act Plays” at traditional brick-and-mortar bookstores or online at Amazon.com, Apple iTunes store, or Barnes and Noble.

For additional information or inquiries about “Three One Act Plays,” contact the Christian Faith Publishing media department at 866-554-0919.