Philip Kinley’s newly released “Bamboo and Bonsai: A Life Calling Shaped by Japanese Culture” is a profound life story of faith and servitude

“Bamboo and Bonsai: A Life Calling Shaped by Japanese Culture” from Christian Faith Publishing author Philip Kinley follows the amazing tale of a boy who grew up in the fields of Kansas and spent the majority of his life away from his hometown to serve God. 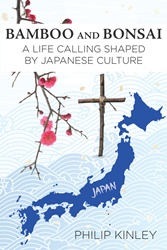 Kinley shares, “Bamboo and Bonsai is the story of a Kansas boy who spent his entire career as a missionary in Japan. His service spanned forty-three years as a missionary of the Church of God. He was the founder and director of the Seminary House program. It was designed to prepare seminarians to become pastors in the Church of God. It offered specialized training in the theology and history of the Church of God. He directed this program for twenty-two years. He was also the principal of Tamagawa Seigakuin a girls junior-senior school in Tokyo. He led a staff of fifty Japanese nationals and four American teachers and over one thousand students in preparing young women from a Christian perspective to develop their God-given talents for life and service in Japanese society. While serving in the field of education, he also pastored churches in Tokyo assisted by unordained ministers. His duties were primarily preaching and conducting official meetings of the church. Later, assisted by his wife, Phyllis, they pioneered a new church congregation in Hagiyama, a suburb of Tokyo. It was a challenging and gratifying endeavor to introduce the people of the community to the gospel, lead them to become Christians, and nurture them as they matured in their faith.”

Published by Christian Faith Publishing, Philip Kinley’s new book chronicles the captivating journey of a man whose life of service moved the lives of many. Here in this memoir, he records his life’s significant events that molded him into the man he is now.

View a synopsis of “Bamboo and Bonsai: A Life Calling Shaped by Japanese Culture” on YouTube.

Consumers can purchase “Bamboo and Bonsai: A Life Calling Shaped by Japanese Culture” at traditional brick & mortar bookstores, or online at Amazon.com, Apple iTunes store, or Barnes and Noble.

For additional information or inquiries about “Bamboo and Bonsai: A Life Calling Shaped by Japanese Culture,” contact the Christian Faith Publishing media department at 866-554-0919.