The J Wakefield Brewing craft beer crowdfunding campaign is providing enthusiasts the opportunity to participate in a “Multi-National Collaboration Brew” with JWB and Jeppe Jarnit-Bjergsø, the man behind Evil Twin Brewing in Denmark. 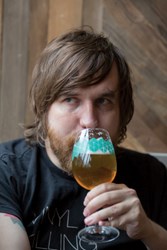 Participate in the creation of a very special collaboration beer with J Wakefield Brewing and Jeppe Jarnit-Bjergsø, the man behind Evil Twin Brewing in Denmark.

In order to open the new Miami brewery, Wakefield turned to crowdfunding and began a campaign on the premier craft beer crowdfunding platform; CrowdBrewed.com. One of the reasons that the campaign has been so successful, raising over $55,000 in 24 hours, is that Wakefield has offered craft beer enthusiasts highly desirable rewards in exchange for their donations.

Wakefield is now offering one lucky person the opportunity to participate in a “Multi-National Collaboration Brew” that could possibly thrust one up-and-coming brewer straight into the limelight. The crowdfunding “perk” will enable the donor to participate in the creation of a very special collaboration beer with J Wakefield Brewing and Jeppe Jarnit-Bjergsø, the man behind Evil Twin Brewing in Denmark. Working at the new J Wakefield Brewing facility in Miami, the donor will work with both Johnathan and Jeppe to not only brew, but to also conceptualize a very unique collaboration brew between the two. This is the ultimate way to build “YOUR” brewing portfolio and then bring home a couple of cases of your killer collaboration to share with friends and family.

Named Best European Brewer according to RateBeer.com, Evil Twin Brewing‘s experimental brewmaster Jeppe Jarnit-Bjergsø is somewhat of a craft beer legend. Uniquely crafting his beer as a “gypsy brewer,” Jarnit-Bjergsø develops each recipe then brews and bottles a limited quantity at one of 10 breweries worldwide where he borrows space. Because of the nature of his process, Evil Twin beers are rarely reproduced.

The J Wakefield Brewing crowdfunding campaign is set to end on October 25th. When the campaign ends, Johnathan Wakefield looks to bring his craft home to his native Miami and envisions a Miami-style brewery in the dynamic and rapidly growing Wynwood Arts District. This unique, homegrown concept will fit in perfectly in with the 70 or so art galleries, funky thrift stores, antique shops, eclectic bars, and amazing outdoor graffiti that define Wynwood.

The Wakefield Brewing campaign has been such a huge success, currently approaching twice the funding originally sought, that Wakefield intends to use the excess funds to upgrade the taproom with an improved bar, better seating and additional customer amenities. If possible, the next step will be to add another fermentor, which will raise his brewing capacity allowing for more special beers, and create a "barrel program" to acquire used barrels to age their beer, again allowing for more unique and special beers.

Craft beer enthusiasts interested in the opportunity to work with Johnathan and Jeppe to conceptualize and create their own brew, should visit J Wakefield Brewing’s crowdfunding campaign at http://www.crowdbrewed.com.

CrowdBrewed.com is a donation / reward crowdfunding platform for craft brewers and industry affiliates who want to raise money for their breweries, to add new beers to their catalog, pitch a product and to spread the word to the “crowd”. Brewers and industry affiliates can create fundraising campaigns that tell their story and pitch their campaign to a “crowd” of donors in exchange for a reward or product. CrowdBrewed is also a place to discover new beers, learn about brewing and show your passion for the industry by getting involved. USA TODAY has touted the company as “the first-ever crowdfunding site designed specifically for craft beer entrepreneurs.”