The Aviation Heritage Center of Wisconsin, the official historian, chronicler and promoter of flight achievement in the state, announces the restoration, flight and recapture of an aviation treasure, one of the only four remaining DC-3's that flew for North Central Airlines, the 78 year old flagship "City of Clintonville." 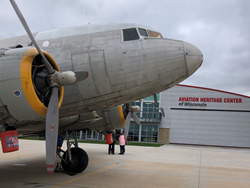 Restoring an old DC3 that sat in the desert for so long is not easy. It is not cheap ... You are doing it because you are a custodian of [Wisconsin Aviation] history, taking on the responsibility of preserving a unique era of aviation unlike any other! My grandchildren, and their's thank you.

Shortly after 2:00 PM Friday October 4th a Douglas DC-3 airliner descended slowly from the southwest, under an overcast sky, onto a pillow of ground effect air just above runway 04 at Wisconsin’s Sheboygan County Memorial Airport (KSBM).

The nearly eighty-year old aircraft was over 50 years late, having left North Central Airlines’ service in 1968, and then opting for final retirement to the high deserts of California. The pilot-in-command Richard Osborne, at 74 a senior aviator with 60+ years and 27,000 hours in the air, was a mere pup compared to the 83,000 hours aloft for the machine he was flying. The twin engine tail dragger’s rubber screeched as its motionless tires caught the grooved concrete, eliciting a Goodyear puff of approval with “DickO’s” greased landing, decelerating and then turning right on Taxiway “F”oxtrot.

FOUR uneventful days, and ONE VERY BIG event … FOUR days, starting in California, with stops in Arizona, New Mexico, and Kansas, ONE VERY BIG Dairyland homecoming to Sheboygan, Wisconsin. This DC-3A-202A, registration N33632, was built for Eastern Airlines in 1941, and acquired by Madison’s North Central Airlines in 1953, a year after a hangar lease’s termination brought about a corporate move to Minneapolis, and a change of the company’s name from “Wisconsin” to “North” Central Airlines. (NOTE: North Central and Southern Airways merged operations in 1979 becoming Republic Airlines, and with their addition of Hughes Airwest in 1980, became the largest airline in the U.S. by destinations served.)

In 1968 its time of transporting hundreds of thousands of midwestern travelers, 30-at-a-time, came to an end … being transformed into a freight-liner under several owners until nesting in Victorville, California, an appropriate location for a valiant steed.

A well-deserved ten-year sabbatical came to an end Spring of 2016. A group affiliated with the Aviation Heritage Center of Wisconsin looked to purchase a centerpiece for their tribute to a formative chapter of the state’s aviation history, commemorating a 50+ regional carrier airliner fleet that had moved millions of passengers, which evolved from two small planes owned by a Clintonville manufacturing firm.

Of all North Central Airlines DC-3s ever flown, only four survive. One hangs in the Henry Ford Museum in Dearborn, Michigan, another in Punta Gorda Florida being cannibalized for parts, a third doing movie work in LA and the last one, ours, that made its way back to America’s Dairyland. Finding great potential is one thing, resurrecting it to 150 mph at 10,000 feet for 1,700 miles, after a decade of dust storms, is another. What’s the difference between potential and the actual? ==> Three plus years of blood, sweat and tears to gather the plans, people, parts and patience to recover the heart and soul of this Jurassic Juggernaut.

The effort put into readying DC-3 202A N33632 for its cross-country journey was daunting:

During Fall 2018 high speed taxi tests the right engine backfired, indicating a failure of seals on the recently overhauled carburetors. As feared, they had dried out while sitting in the arid desert without fuel. Six months, and about $14,000 later, the carburetors were re-mounted.

Diamond Anniversary status did not excuse this aged beauty of the FAA paperwork required for a Part 135 airplane weighting over 12,500 pounds. A new Airworthiness Certificate, new Maintenance Manuals, and other documentation needed to be put in proper order. Fortunately, besides our Chief Pilot Dick Osborne and his mechanic, our project team included Designated Airworthiness Representative, Jim Rezich of Rockford, Illinois, who has been involved with many vintage DC-3 projects.

GO TIME – 3:24 PM / 2324 ZULU Pacific October 1, 2019
Captain Richard “DickO” Osborne lifted off from Adelanto, CA airport with First Officer Hauldo (pronounced Waldo) Mendoza and Flight Engineer Glenn Valenstein. Flying Visual Flight Rules with only handheld radios and Foreflight moving map iPads, they guided their octogenarian magic carpet along. All the gut-busting, mind-blowing, budget-bashing hard work paid off. In aviation, you want quandaries and challenges comprehensively dealt with before takeoff on terra firma. The AHCW team was so convicted, and it made for a set of good legs on the flight home.

We would be remiss to not express our gratitude to the Lord for His grace and protection over the project, plane and people, as we were humbled and saddened by the Collings Foundation B-17G N93012, “Nine-O-Nine” that crashed at Bradley Airport in Connecticut on October 2 while our DC-3 was in transit between California and Arizona. The skies fascinate us, and have so sparked mankind’s imagination, creativity and wit that God’s creatures have been allowed visiting rights, yet they are not ours. Thank you.

The AVIATION HERITAGE CENTER of Wisconsin, located at Sheboygan County Memorial Airport (KSBM), was founded in 2005. It has been officially designated as the State of Wisconsin’s Aviation Heritage Center by both houses of the Madison Legislature.

Among the attractions at the Center are the Governors Kohler Aviation Conference Room and exhibit paying tribute to the state’s father-and-son Governor pair, Walter J. Kohler, Sr. (1929-1931), first candidate to campaign by air for public office, and Walter J. Kohler, Jr. (1951-1957), a pilot and decorated World War II Naval Lieutenant Commander, who served as air combat intelligence officer during WWII on the carrier USS Hancock (CV-19).

Besides a large aeronautical library and hosting air shows, the museum boasts a rich array of flight memorabilia, models, historic training simulators, a T-28 aircraft that trained Hmong pilots in Vietnam and “The City of Clintonville,” one of the few operable DC-3 airliners in the world, and a proud alum of North Central Airlines fleet, founded in Clintonville, Wisconsin.

THE CENTER’S MISSION is to celebrate, inspire and educate the generations in STEM principles intrinsic to flying and through pathfinders and accomplishments of Wisconsin’s rich aviation history.