Phyllis Woods’s newly released “The Kingdom of Fairwind” is a brilliant fairytale about dreams, desires, and unexpected happy endings

“The Kingdom of Fairwind” from Christian Faith Publishing author Phyllis Woods follows four different individuals, who live completely different lives, somehow finding their paths intertwined as one adventure leads to the next. 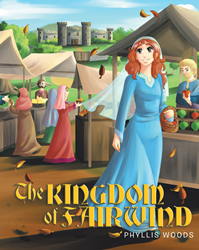 “The Kingdom of Fairwind”: a fantasy saga that follows a prince who left the palace for an adventure, an intruder who fills his place, a fortunate and wealthy girl who dreams of the kingdom, and a simple girl who suddenly finds herself winding up with all the other three. “The Kingdom of Fairwind” is the creation of published author Phyllis Woods, a writer who expresses her faith through writing, art, and dance. She worked as a show host at Holy Land Experience in Orlando. She has also served as a deacon and elder at Winter Park Presbyterian Church.

Woods shares, “Stephen, the King’s only son, is bored and tired of the protected life he leads in the palace of the kingdom of Fairwind and decides to leave on an escape adventure.

“What follows is nothing that he expects and tests his very will to survive.

“In his absence, an interloper comes in and happily fills his shoes, making the most of the lavish lifestyle offered by the palace.

“In one of the wealthier homes in Fairwind, an attractive and vain girl named Priscilla stares at her reflection in a mirror and imagines her future in the halls of the palace.

“In the poorer section of town, another young girl named Rebecca goes about her life delivering clothes made by her mother to the wealthy people in the other section of town. She has no idea that her life is about to intersect with the lives of each of these other people.

“The Kingdom of Fairwind is a place where unexpected things happen when the dreams and desires of its people collide with each other.”

View a synopsis of “The Kingdom of Fairwind” on YouTube.

Consumers can purchase “The Kingdom of Fairwind” at traditional brick & mortar bookstores, or online at Amazon.com, Apple iTunes store, or Barnes and Noble.

For additional information or inquiries about “The Kingdom of Fairwind,” contact the Christian Faith Publishing media department at 866-554-0919.