WCCTA is again offering the fun of participating in the Pick It March Mania starting March 1st. This friendly competition has been a fun way to enjoy the March Mania with your friends and family. 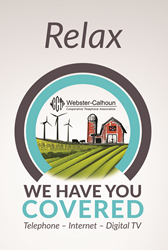 "We have offered this fun contest the last couple of years and participants really enjoyed competing against others in our community," states Marcie Boerner, Office Manager with WCCTA.otable

Dates for this year's March Mania are March 12th as Selection Sunday where brackets are announced, March 16th the bracket games begin and participants can no longer fill out brackets. April 1st is the Final Four with the Championship Game to be played on April 3rd.

It is so easy to play. Just fill out the bracket by clicking the name of the team to win each game. After completing the bracket, click submit and enter the information requested. Once the NCAA games begin, email updates will be sent out to show pick rankings against others in the community.

WCCTA will be handing out prizes to the top three winners. All the information can be found on the website at http://wccta.pickitchallenge.com.

"We have offered this fun contest the last couple of years and participants really enjoyed competing against others in our community," states Marcie Boerner, Office Manager with WCCTA. "This time of year it is fun to join in on all the excitement of the NCAA Tournaments".