Recent release “Orphan to Greatness: An African Story” from Page Publishing author Pierre Komi T. Adade is an inspiring biography about his family’s past and his own immigration to America, fulfilling his father’s lifelong dream. 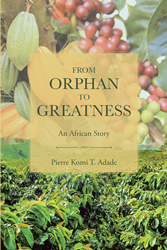 Pierre Komi T. Adade, a resident of Charlotte, North Carolina, originally from Togo, West Africa, has completed his new book “Orphan to Greatness: An African Story”: a gripping and potent biography describing his family’s past and how he eventually ended up immigrating to America.

Pierre writes, “I will never, ever forget the touching, emotional statement our father used to whisper in our ears as we were growing up. ‘I would rather sacrifice everything I have, even go naked and see you, my children, succeed in life than spend the little money I have on personal luxuries and deny you an education. As you well know, when I was your age, I wasn’t fortunate enough to have someone there to back me up for an education. Believe me, it hurts like an open wound. I do not wish for you to experience even one iota of what I have endured. All I want from you is for you to take advantage of my willingness to help you, to build a secure future for yourself, as well as for the generations to come. You don’t have to pay me back. You really don’t even have to take care of me in my old age either. I don’t expect any of these things from you. I just don’t want any of you to look back years from now and blame me for not helping you to succeed in life. I just want you to be happy because I love you.’”

Published by Page Publishing, Pierre Komi T. Adade’s intriguing tale describes Pierre’s life experiences growing up, how his parents have raised him and how he succeeded by fulfilling his father’s wishes of having a child educated in an English-speaking country.

Readers will get to know Pierre personally. This biography not only chronicles Pierre’s life, but describes how his parents have shaped him. He details the lessons they have instilled upon him throughout his life. Pierre also mentions what major events took place around him, while he was growing up. He was born and raised in a tribe in West Africa. The tribes’ and his parents’ values and religion have immensely shaped his outlook and perspectives on life.

Throughout his life, he has been inspired by his father. His father was an orphan growing up, which is the inspiration for the title. Pierre’s father was a coffee grower in West Africa, but when he was younger he yearned for an education to become a doctor or something similar. Since Pierre’s father did not have a family growing up, he was unable to get an education as he hoped. His circumstances caused him to become a coffee grower in order to provide for himself and his family. As a result, Pierre’s father dreams have changed from obtaining a better education for himself to having his children receive a better education in America or another English-speaking country.

Readers who wish to experience this potent work can purchase “Orphan to Greatness: An African Story” at bookstores everywhere, or online at the Apple iTunes Store, Amazon, Google Play, or Barnes and Noble.