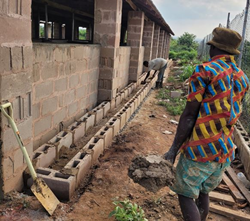 Salesian missionaries have continued to develop the St. Joseph’s Farm, in Sagamu, Nigeria, thanks to donor funding from Salesian Missions, the U.S. development arm of the Salesians of Don Bosco. The farm is a center for training, research and production on 25 hectares of land acquired by the Salesians.

Since it started, the farm has improved the farming skills of many local and small farmers, brought awareness to youth on the importance of farming, trained local people on various farming techniques, and created a cooperative of small farmers.

With the funding from Salesian Missions, the farm developed both a fishery and a pig farm, which is being expanded. The current pig barn has 20 rooms for the pigs and two rooms for feed storage. A total of 29 boars and sows are at the farm, along with 135 piglets that have been purchased or reared at the farm.

The pig barn still needs to be plastered, as well as have proper flooring and plumbing completed. With the high cost of materials and services caused by national economic inflation, construction has been delayed. It is currently about 90 percent completed.

The facility also needs better water, a regular generator and solar power supply for the survival of the pigs. An eight-feet tall water tank was installed for the provision of regular water. In addition, another 7,000-liter water tank is needed to supplement the water supply.

There are six paid workers who ensure that the piggery is properly cared for and the pigs well fed and nourished. These are local farmers who have been trained over time to rear animals especially pigs. To date, more than 100 people have received farm training.

With a population close to 256,000, including a mix of Christians, Muslims and traditionalists, Sagamu is known for its agricultural products such as cocoa and kola nuts. The region’s rich vegetation and large masses of unoccupied or unused land attract people who develop an interest in agriculture. Yet, the region has high rates of unemployment and underemployment, as well as a low rate of formal education. St. Joseph’s Farm is one among many programs that Salesian missionaries have launched since they first started working in the region in 2014. There is also a parish ministry, missionary out-stations, youth ministry, chaplaincy and agro-projects.

According to UNICEF, Nigeria is Africa’s most populous country and the ninth most populous country in the world. By United Nations estimates, Nigeria will be one of the countries responsible for most of the world’s total population increase by 2050. While Nigeria has the second strongest economy in Africa, it also has extreme rates of poverty with 100 million people living on less than $1 a day.

About 64 percent of households in Nigeria consider themselves to be poor while 32 percent of households say their economic situation had worsened over a period of one year, according to UNICEF. Poverty still remains one of the most critical challenges facing the country and population growth rates have meant a steady increase in the number of people living in conditions of poverty.

About Salesian Missions, USA
Salesian Missions is headquartered in New Rochelle, NY, and is part of the Don Bosco Network—a worldwide federation of Salesian NGOs. The mission of the U.S.-based nonprofit Catholic organization is to raise funds for international programs that serve youth and families in poor communities around the globe. The Salesian missionaries are made up of priests, brothers and sisters, as well as laypeople—all dedicated to caring for poor children throughout the world in more than 130 countries and helping young people become self-sufficient by learning a trade that will help them gain employment. To date, more than 3 million youth have received services funded by Salesian Missions. These services and programs are provided to children regardless of race or religion. For more information, go to SalesianMissions.org.