What started as a 96-field contest on Twitter has resulted in one grand champion being named in the inaugural AstroTurf Fan Favorite High School Field Contest. 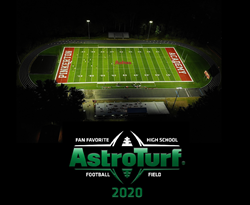 What started as a 96-field contest on Twitter has resulted in one grand champion being named in the inaugural AstroTurf Fan Favorite High School Field Contest. After six total rounds and thousands of votes being cast by high school fan bases, the contest was whittled down to three outstanding choices: Somerset High School of Kentucky, Marysville High School of Ohio, and Pinkerton Academy of New Hampshire.

Two AstroTurf football fields at a time were posted on Twitter and fans could vote on their favorite field with the one getting the most votes moving on to the next round. The voting remained tight until the very end with only a few dozen votes being the difference from 1st and 3rd place.

“We are thrilled that Memorial Field was selected as the AstroTurf Ultimate Fan Favorite High School Football Field,” said Pinkerton Headmaster Timothy Powers. “Through the hard work of many volunteers, money was raised by donations to build it. We are so proud of what this field represents, and it has been rewarding to see our student-athletes have the opportunity to play on it.”

Pinkerton Academy was founded in 1814 and is the largest independent high school in the United States. With a student body of over 3,300 and more than 500 faculty and staff members, Pinkerton Pride runs deep.

First American in space and one of Pinkerton’s most famous graduates, Alan Shepard, is the reason Pinkerton is the Astros. Pinkerton’s athletic program is a powerhouse in the state of New Hampshire. With 23 unique sports offered over 65 teams, approximately 1,300 student-athletes compete each year.

“Many thanks to the tremendous fan support our community has consistently demonstrated in supporting Pinkerton Academy and its athletic programs. Our continued success throughout the years is a direct reflection of this support,” stated Athletic Director Brian O’Reilly

The field itself is an AstroTurf 3D3 synthetic turf system. The “3D3” designation means the field also has AstroTurf’s RootZone, a sub-layer of crimped fibers that stabilizes the infill and increases shock absorbency. The turf has a 52-ounce face weight, meaning it has very dense stitching. All of these factors combine to make a synthetic turf that is stronger, safer, better, and more resilient. Pinkerton’s field was expertly installed by Certified AstroTurf® Distributor, Atlantic Sports Group of Canton, MA.

O’Reilly added, “Our new AstroTurf fields have had an immediate impact on our athletic programs. The tremendous branding element for our school (end zones and logos that pop with dazzling colors) and quality of turf (multi-use for all of our outdoor sports) have increased our numbers and brought our community closer together.”