Nina Vaca, Pinnacle Group Chairman and CEO, has been recognized as one of the “Top 50 Most Powerful Latinas” by the Association of Latino Professionals for America (ALPFA). ALPFA’s Most Powerful Latinas list celebrates influential Latinas who provide significant contributions to the business community. 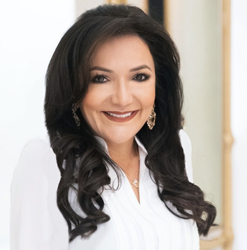 I’ve often said that you cannot be what you cannot see, and by showcasing what these women have accomplished, ALPFA is giving the next generation of Latinas an outstanding group of role models to look up to, showing them that they too can accomplish great things in business.

The Association of Latino Professionals for America (ALPFA) announced its third annual list of the 50 Most Powerful Latinas of 2019. The announcement was made during their annual convention in Nashville, TN. Pinnacle Group Chairman and CEO Nina Vaca was named to the list for the third year in a row, this year at number 4.

ALPFA’s Most Powerful Latinas list highlights the achievement of Latina executives running Fortune 500 companies, departments, and large private firms, along with entrepreneurs of leading global companies. The criteria used to determine which outstanding Latina leaders would be included are size and importance of the woman’s business in the global economy, the health and direction of the business, the arc of the woman’s career (resume and runway ahead), and their social and cultural influence.

“ALPFA proudly recognizes and celebrates the accomplishments, contributions, and influence of these powerful women. Included in the list are women who run multi-billion dollar business lines and divisions in public corporations, private companies, and affect change through their service on corporate and non-profit boards. The Most Powerful Latinas list was created to highlight the incredible impact that these trailblazing Latinas are having on the business world and the community,” said Damian Rivera, CEO of ALPFA.

“The women included in this distinguished group of respected and accomplished leaders are an inspiration to me and so many others, and I am proud to stand alongside them,” stated Nina Vaca, Chairman and CEO of Pinnacle Group. “I’ve often said that you cannot be what you cannot see, and by showcasing what these women have accomplished, ALPFA is giving the next generation of Latinas an outstanding group of role models to look up to, showing them that they too can accomplish great things in business.”

Vaca and all the leaders named to the 2019 list of most powerful Latinas will be formally honored at ALPFA’s Annual Summit and Reception on Oct. 3, 2019, hosted at the Goldman Sachs Tower in Jersey City, New Jersey.

About Nina Vaca
Nina Vaca is Pinnacle Group’s Chairman and CEO. She is also one of the few (and youngest) Latinas serving as a director of publicly traded corporations. With Women on Boards 2020, she is working to increase the number of women on public company boards. In addition to her business leadership, Vaca is a civic leader and philanthropist, working relentlessly to expand opportunities for minorities and women in business, particularly in STEM fields in the U.S. and around the world. Recently, she was elected as a lifetime member of the Council on Foreign Relations (CFR). She is also a Henry Crown Fellow at the Aspen Institute as well as a German Marshall Memorial Fellow. For information and resources, visit NinaVaca.com.

About Pinnacle Group
Pinnacle Group is a leading provider of workforce solutions headquartered in Dallas, Texas. Founded by Nina Vaca in 1996, Pinnacle Group’s core services include talent acquisition and management, managed services (MSP), and payrolling. With an unwavering commitment to client service and a specialty in analytics and emerging technologies, Pinnacle Group provides transformational outcomes to primarily Fortune 100 clients. Its Progata Talent Platform utilizes machine learning (ML) and proprietary algorithms to help match talent with opportunity and maximize utilization rates. Pinnacle Group is consistently named one of the fastest-growing companies in the country and was named fastest-growing women-owned company in the country by the Women Presidents’ Organization in both 2015 and 2018. For more information, visit pinnacle1.com.