Pioneer Institute is pleased to announce winner and runners up of the 29th annual Better Government Competition. The theme of the 2019 contest was, “Moving People, Moving Goods, Moving Forward,” focusing on innovations that prepare America for the future of transportation. 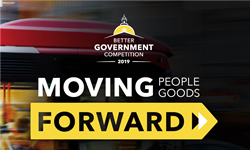 The competition received over 140 entries from transit and other public agencies, tech entrepreneurs, universities, and nonprofits across the nation. The winner, four runners-up, six special recognition recipients, and a “citizens” awardee will be honored at the Better Government Competition Awards Gala tonight, September 16th, at the Hyatt Regency Hotel in Boston.

“No one solution can address our region’s transportation needs, especially during this period of rapid economic growth. With tech innovations across the transportation sector, what we need is a different mindset–to embrace the future,” says Jim Stergios, executive director of Pioneer Institute. “The 2019 Competition takes up that charge, with the winning ideas spanning freight delivery, construction costs, expressway congestion, commuter rail modernization, and more. The judges fittingly chose as Competition winner an entry that develops fresh talent capable of taking advantage of exciting opportunities in the industry.”

LA Metro’s Operation Farm Team is a Career Pathway Program that combines education, mentorships, and hands-on learning opportunities to offset the system’s aging workforce and fill the transportation-related jobs that will be created over the next 40 years. The centerpiece of the program is a new transportation academy to train high school students to be the next generation of transportation employees. LA Metro is slated to deliver 40 major transportation projects in Los Angeles County over the next 40 years, creating 778,000 jobs. But who will fill those jobs? LA Metro will lose 42% of its workforce to retirement in the next 5 years; 68.5% of employees are over 40.

This entry was submitted by Phillip A. Washington, who has been CEO of LA Metro since 2015. He manages a budget of $7.2 billion, with over $18 billion in capital projects, nearly 11,000 employees, six rail lines and 2,000 clean-air buses transporting 1.2 million passengers daily. Previously, he served as CEO of Denver Regional Transportation District. He is the recipient of numerous awards and honors, including for his service in the U.S. Army. He is a graduate of Columbia College, Webster University, and Harvard’s Kennedy School.

At the awards gala, Mr. Washington will receive the $10,000 top prize and deliver acceptance remarks.

Bruce Landsberg, Vice Chair of the National Transportation Safety Board, will provide a keynote presentation. Vice Chair Landsberg was appointed in 2018, after holding leadership positions with the Aircraft Owners and Pilots Association Foundation, which received international recognition and numerous awards for promoting light aircraft safety. He has also worked for Cessna, Flying magazine, and Flight Safety International, and served in the U.S. Air Force.

Massachusetts Governor Charlie Baker is also a featured speaker at the event. Governor Baker’s administration is overseeing a major overhaul of the MBTA, investing billions in long overdue infrastructure upgrades, and implementing reforms to operations and finances. Almost a year ago, the administration released a report outlining longterm challenges and opportunities from an appointed Future of Transportation Commission. This summer, the Governor’s commission to study traffic congestion in Massachusetts included proposals for investments in the Commonwealth’s transportation system.

The runners up, described below, will each receive $1,000.

Keith Molenaar, Professor and Associate Dean for Research, University of Colorado Boulder and Arthur Antoine, Senior Project Manager, Shrewsberry: The Federal Highway Administration, along with Colorado’s Department of Transportation, developed a Project Delivery Selection Matrix to provide an up-to-date perspective on the types of alternative contracting methods for highway construction and a formal approach for selecting highway project delivery methods, so that state agencies can get more work in place faster and with less disruption to the traveling public.

Conrad Crawford, Member, Cambridge Redevelopment Authority: A Tolled Express Lane on the Northern Expressway would improve traffic flow, reduce congestion, and, most importantly, reduce air pollution in those communities that have long borne the brunt of tailpipe emissions.

Bringing the Providence Line into the 21st Century
Ari Ofsevit, Transportation Planning Fellow, TransitMatters: Converting the cars that run on the Providence Commuter Rail Line from diesel to electric, and building new station platforms that would allow for level-boarding, would decrease travel times, allowing for an increase in the number of trains that run during rush hour and, in turn, likely increasing ridership, all while dramatically reducing staffing costs per trip.

The winning entries were selected by a distinguished panel of judges with expertise in transportation, including:

Six special recognition awardees will also be acknowledged at the gala:

Christian Kotscher, Founder & CEO, MetroTech: MetroTech leverages existing infrastructure to produce real-time traffic counts and speeds to change signal-timing patterns and reveal the accurate condition of traffic in a Digital Streets Platform that can be broadcast to drivers and autonomous vehicles, and accessed by vehicle makers and app developers.

At the Better Government Competition Awards Gala, a compendium of winning entries will be distributed to attendees; Pioneer will also send it to policy makers and opinion leaders in Massachusetts and across the country.

Pioneer Institute is an independent, non-partisan, privately funded research organization that seeks to improve the quality of life in Massachusetts through civic discourse and intellectually rigorous, data-driven public policy solutions based on free market principles, individual liberty and responsibility, and the ideal of effective, limited and accountable government.