Launched in 2009, Terryberry's Give a WOW platform was one of the first on the market to offer a social media style interface for peer-to-peer recognition in the workplace. 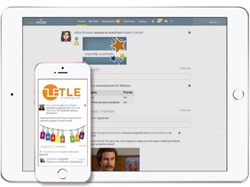 Now, in 2019, Give a WOW celebrates a major milestone: a decade of WOW moments. Shortly, Give a WOW will have its 10 millionth recognition moment!

Launched in 2009, Terryberry's Give a WOW platform was one of the first on the market to offer a social media style interface for peer-to-peer recognition in the workplace. Now, in 2019, Give a WOW celebrates a major milestone: a decade of WOW moments. Shortly, Give a WOW will have its 10 millionth recognition moment!

Social media and business in 2009

In its early release, Give a WOW was a revolutionary tool that provided organizations with a way for workers to instantly give and receive recognition for going above and beyond. It also allowed leaders to crowd-source the recognition process for a better employee experience and deeper insights into business performance.

Give a WOW was developed under the leadership of Terryberry's 4th generation managing partner, Mike Byam. Terryberry, a family-owned business founded over a century ago, had an established reputation for high quality recognition awards. Its customers knew Terryberry primarily as a service awards provider. Byam had a vision for revolutionizing the recognition industry by developing a solution for highlighting day-to-day achievements as well as the major milestones. He saw technology as the vehicle to accomplish this. Together with CIO Dan Egan and several others from the organization, they began conceptualizing the idea of a virtual bulletin board where employees could share and applaud each other's successes, and Give a WOW was born.

Social media's growing use in the workplace

"Since the birth of Give a WOW, the conversation has evolved significantly," says Byam. "A decade ago, businesses were debating whether social media style communication could or should be used in the workplace. Today this type of interaction with employees is a given for most businesses."

In fact, 77% of workers today say they use social media on the job. Since then, social recognition apps have popped up from a number of other providers. Asked about the competitive landscape, Byam says, "We're extremely proud of where Terryberry is positioned in the marketplace. I don't know of another social recognition program that offers as robust a feature set and is accessible for organizations of all sizes."

"One of the things that is most exciting to us is seeing how the Give a WOW platform helps bring individuals forward for their achievements when they might otherwise have been overlooked in the background," Byam continues. "The platform helps ensure that everyone has a voice and an opportunity to be celebrated for their unique value."
A social recognition program for small businesses and enterprise organizations

As Terryberry's solution set has grown, Give a WOW has become a cornerstone of the company's 360 Recognition platform, which is described as a total solution for building a culture of employee recognition.

What's ahead for Social Recognition

Give a WOW continues to mature with new features added regularly, such as integrations with 3rd party apps like Red e App, a communication application for non-desk workers in settings like manufacturing or healthcare.

CIO Dan Egan says, "In 2008, Terryberry's CEO Mike Byam authored the WOW! Workplace book and inspired us to come up with a transformative software platform. That was the genesis of the 360 Recognition platform and the social recognition feature Give a WOW! It has now grown into a multi-tenant enterprise platform, serving customers all over the world. Our innovation driven development team continues the thought leadership tradition started a decade ago."

The social recognition wave continues to rise, as organizations leverage the value of crowd-sourced recognition within their company walls as well as sharing employee achievements externally through social channels.