Advanced multi-functional Pipe Crawler from MEDIT for inspection of pipes from 150mm to 3500mm (6” to 120”). Depending on the configuration, this affordable system has cables from 200 meters (656 ft) to 600 meters (1,968 ft) on a manual or a motorized reel, plotting and measuring capabilities and Full HD front and rear cameras. 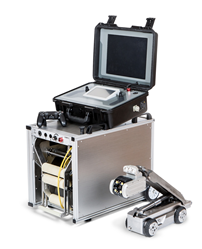 The Pipe Crawler SIGMA HD was designed and manufactured in order to cover most existing pipe types and shapes. In addition, this new system provides a comfortable working environment due to a solid array of functions.

The control unit of the system features two touch screens, a built-in telemetry computer with Telescan software and a 256GB internal memory. Two joysticks help to make steering and navigating the robot easy and intuitive. For added protection, the control unit is placed within a hardshell Pelican type case.

In general, durability and safety are some of the outstanding characteristics found in the pipe crawler. The G8 cables are multicore, Aramid reinforced, and protected with thermoplastic housing, while the wet cable end is made of stainless steel. The standard SIGMA HD 150 model comes with a standard 200m (656’) or 250m (820') optional cable, while the enhanced SIGMA HD 200 version is supplied with a variety of cable lengths ranging from 250m (820’) up to 600m (1,968'). The former simplified model is equipped with a manual reel with a tensioner and a smart rewinder function, while the latter, enhanced version of the system boasts a motorized reel, which unwinds, retracts and regulates the cable automatically. Predictably, the robot with the camera and the cable are fully waterproof.