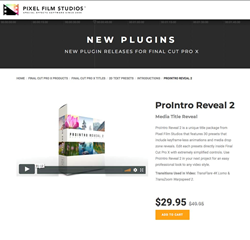 ProIntro Reveal 2 is a unique title package from Pixel Film Studios that features 30 presets that include keyframe-less animations and media drop zone reveals. Edit each presets directly inside Final Cut Pro X with extremely simplified controls. Use ProIntro Reveal 2 in any project for an easy professional look to any video style.

ProIntro Reveal 2 features 30 uniquely designed presets that include keyframe-less animations and media drop zone reveals. Browse the ProIntro Reveal 2 library by scrolling over the presets and scrubbing through them to view the animation, then drag the desired preset into the FCPX timeline.

Edit each presets directly inside Final Cut Pro X with extremely simplified controls. The user can adjust all aspects of the text including font, size, and tracking. Additionally, make sure the text sits within the text guide box to ensure the presets animation is retained.

ProIntro Reveal 2 features keyframe-less animations for any user to simply drag and drop the preset, edit text, add media and instantly have a unique title intro. No need to keyframe any part of the animation for media or text. Edit the source text within the preset controls and further edit all aspects of the text in the Text Inspector window in Final Cut Pro.