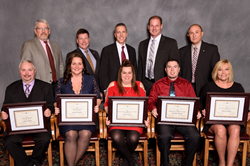 Annually the Plamondon Companies continues the tradition of hosting their management dinner and awards program at Dutch’s Daughter in Frederick, MD. In attendance were managers and office support staff of Roy Rogers Restaurants and Plamondon Hospitality Partners hotel properties.

Jonathan Barton, General Manager for the Roy Rogers Restaurant in Thurmont, MD, received the Co-President’s Pride Award. Jonathan has worked for Plamondon Enterprises since being recruited from Mercyhurst University in 2006. He moved to Frederick, MD and began his management career as an Assistant Manager for the Roy Rogers brand, and was promoted to General Manger in August 2011. Jonathan has consistently embodied the company mission “The values you respect” both inside and outside of work. As part of the mission declaration of community involvement, Jon coaches little league baseball in his community. He is active in the Thurmont Mainstreet Community and participated in the first annual “Restaurant Week” for the town of Thurmont. He created menu items specifically for that week to showcase our menu.

General Manager and Manager of the Year awards were based on four criteria categories: financial results, operational excellence, leadership, and community involvement. Receiving recognition for 2018: