Dietary Intervention for Gut Health, the first session in the new Plantrician Education Series, is a one-day, virtual live seminar presenting the evidence supporting the use of whole food plant-based nutrition in the treatment & prevention of gastrointestinal disease. 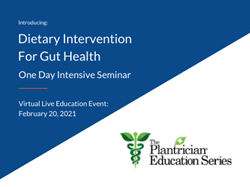 With up to 70% of the immune system and 90% of serotonin originating in the gut, and a rising number of patients experiencing reflux, IBS, Crohn's Disease, and other gut diagnoses, it is critical that clinicians understand the efficacy of whole food plant-based nutrition to maximize gut health.

The Plantrician Project announced today that they are expanding their premier medical education curricula to include The Plantrician Education Series, a new medical education offering that gives physicians and other clinicians the opportunity to more thoroughly explore emerging topics supporting the use of whole food plant-based nutrition as a medical intervention.

Dietary Intervention for Gut Health, set to be held virtually live on February 20, 2021 is the first session in a new series of one-day intensive seminars. During six lectures followed by a two-hour panel discussion and live Q&A session, leading experts in Gastrointestinal Medicine and Nutrition, including Dr. Will Bulsiewicz, Dr. Michael Klaper, and Dr. Vanessa Mendez will present the latest scientific evidence supporting the use of plant-based nutrition for optimal gastrointestinal (gut) health.

Gut health is emerging as one of the most important health topics of the 21st century. According to the NIH’s National Institute of Diabetes and Digestive and Kidney Diseases, 60 to 70 million people in the U.S. are affected by digestive diseases and the National Institute for Health estimates between 18-27.8% of American adults have GERD, an uncomfortable condition in which stomach acid frequently backs up from the stomach to esophagus and in some cases can lead to increased cancer risk.

"With an estimated 70% of the immune system, and 90% of serotonin originating in the gut, and a rising number of patients experiencing reflux, IBS, Crohn's Disease, and other gut diagnoses,” explains Dr. Scott Stoll, Co-founder and Chairman of The Plantrician Project, “it is critical that clinicians in all fields understand the efficacy of whole food plant-based nutrition to maximize gut health".

The scientific evidence overwhelmingly supports the efficacy of a whole food plant-based dietary lifestyle for the prevention, treatment and reversal of many chronic diseases including those originating in the gut, yet most practicing physicians have received, on average, only 20 hours of clinical nutrition education during their entire medical training. This, despite evidence that shows poor dietary lifestyle is a primary driver of chronic, non-communicable disease across the U.S. and around the world. The Plantrician Project exists to fill this void.

Dietary Intervention for Gut Health will be held virtually live February 20, 2021 and is the first seminar in The Plantrician Education Series, a new offering intended to complement the Project’s highly regarded International Plant-Based Nutrition Healthcare Conference. Now in its 9th year, PBNHC has equipped thousands of physicians and allied health professionals with medical training on the efficacy of a whole food, plant-based dietary lifestyle for treatment and often, reversal of chronic disease. Visit the Dietary Intervention for Gut Health website for more information and to register.

The Plantrician Project, a 501c3 not-for-profit corporation, is the world’s leader in the development and presentation of medical education content and resources supporting the use of whole food plant-based nutrition in a food-as medicine first approach to preventing and reversing the epidemic of chronic illnesses plaguing our nation and the world. For more information visit PlantricianProject.org.