Though they may own their own businesses, even self-employed U.S. citizens must pay taxes. An estimated $69 billion of unpaid taxes are attributed to the gig economy. Part of the reason gig workers aren’t paying taxes is they aren’t accurately informed on how to file properly. To help close the gap on misinformation on paying taxes as a member of the gig economy, Platinum Tax Defenders offers advice for gig workers with the following tips on how to deal with their taxes. 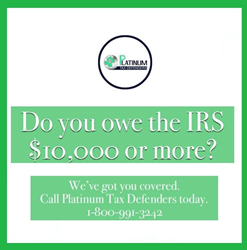 As of May 2017, more than 15 million Americans made up the gig economy, according to an article in the Associated Press from 2018. Those gig workers, including independent contractors, on-call workers, temporary workers, and those working for contract companies made up 10.1 percent of the American workforce. However, according to a recent article in Financial Advisor magazine, the IRS last estimated the self-employed portion of the annual tax gap at $69 billion.

If gig economy workers are continuing to make up a significant portion of the American workforce, why are so many taxes going unpaid? The answer might be that gig economy workers aren’t accurately informed on exactly how to file their taxes correctly. However, the IRS shares in detail on their website information for filing taxes accurately for those participating in the sharing economy, or gig economy. To help gig economy workers continue to thrive, whether they’re renting out their room or house, or serving passengers via a rideshare service, Platinum Tax Defenders is sharing tips for filing taxes as a self-employed tax paying American.

If You Receive Money For Your Services, It’s Taxable
Gig economy workers might think the money they make from renting out their room or driving for a rideshare company might just be extra cash in their pockets. However, the IRS treats all exchanges involving services or products being provided for money as taxable transactions. Gig economy workers still must pay income taxes on the money they earn, including tips.

Keep Track Of The Money You’re Making
It’s the responsibility of the gig worker to keep track of the money they earn and report it on their tax returns. IRS Form 1099-K reports income that is processed through third-party networks, such as PayPal. Third-party networks must report income using Form 1099-K if the gross payments exceed $20,000 and 200 transactions within the tax year.

Keep Track Of Your Expenses
For gig workers, there are oftentimes endless amounts of expenses to write off. For example, taxpayers who drive for Uber and Lyft can qualify to claim the standard mileage rate deduction, which is currently equal to 58 cents per mile. In addition, if you have a qualified home office, you can deduct some expenses such as home insurance, utilities, and rent.

Evaluate Estimated Tax Payments
Self-employed individuals will want to set up a plan for tax payments that are due the following year. Understand what your tax liabilities will be this year to get an idea of how much to set aside for this year’s and next year’s taxes.

As the gig economy continues to grow, it’s imperative for freelancers and the self-employed to fully understand how to file taxes as a gig economy worker. Working with a tax professional can help freelancers set up their financial accounts in a way that will better prepare them for future tax seasons. The risk of being a gig economy worker is underreporting or over reporting earned income. Underreporting income runs the risk of alerting the IRS, and then you might be faced with back tax issues.

As your side hustle turns into your full-time hustle, Platinum Tax Defenders recommends working with a tax expert to help you navigate taxes as a gig economy worker.

If you’re a gig economy worker and concerned that you aren’t preparing for tax season to the best of your ability, contact Platinum Tax Defenders for a free consultation today.