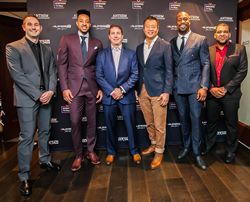 “Anthem is committed to building platforms that specifically engage with passionate fans and loyal audiences, and PlayersTV is exactly what we had in mind when we initially embarked on this mission,” - Len Asper, Founder and CEO of Anthem Sports & Entertainment

Today, the Players Media Group - a sports-centric new media entertainment company - announced the creation of PlayersTV, a new network dedicated to sports lifestyle and culture entertainment. With elite professional athletes such as legends Carmelo Anthony, Vernon Davis, CJ McCollum and Chris Paul as partners - among others – PlayersTV will launch in March 2020 on Samsung TV Plus. Anthem Sports & Entertainment, owner of AXS TV, Impact Wrestling and other media properties, is also an investor and strategic partner in Players Media Group.

“In today’s world, the desire to not only connect directly with athletes but also learn about their lives off the field of play continues to grow exponentially. But it hasn’t always been easy getting great athlete content into the hands of fans,” said Players Media Group co-founder Deron Guidrey. “Through PlayersTV, we’ve created a distribution ecosystem that brings fans and athletes together in one place, making it easier for fans to access the content they desire, and easier for athletes to reach their fans and also better monetize their content. I’m excited to have world-class athletes join us as shareholders, investors and partners on this journey.”

Players Media Group is the newest venture of Collin Castellaw and Deron Guidrey, the sport entertainment and marketing visionaries behind Pregame Media, the digital agency that helped sports influencers to brand, monetize and scale their brands. Players Media Group has attracted a team of media industry experts with a combined 70+ years of digital, broadcast and streaming experience.

“We’ve assembled a world-class team of industry professionals who have proven track records of success in developing, launching and operating both linear and OTT channels,” said Players Media Group co-founder Collin Castellaw. “With this executive team at the helm, and with the support from athletes, strategic partners and our advisory board of industry luminaries, we believe we can make an immediate impact and help athletes to fully benefit from their content.”

At the helm is television industry veteran Nancy Pingitore who will serve as CEO and is leading the launch of PlayersTV into the video viewing marketplace. Pingitore has 30 years of experience in cable television and broadcast, including senior positions at the Tennis Channel, Incanta, MOR Music TV and the ’92 Olympics ‘Triplecast’ PPV Coverage where she has led sales, strategy, business development operations. In addition to Pingitore, the executive team will include veteran sports and entertainment attorney Matt Allinson, and Showtime and Disney programming alum Bruce Rider as Chief Content Officer.

In addition to the company’s executive team, Players Media Group is supported by a team of advisors and industry veterans from the sports, entertainment and marketing industries, most notably including:

At the PlayersTV launch party during NBA All-Star Weekend, professional athletes in attendance talked about PlayersTV and the impact they believe it will make for athletes.

NBA All Star and Co-Founder of Creative 7, Carmelo Anthony
“PlayersTV is becoming a new option to address the challenges of distribution that many producers are facing today. The opportunity to leverage a platform that can be home for sports content by athletes, for athletes, and about athletes is powerful.”

Vernon Davis: NFL Veteran, PlayersTV Investor and Founder of Reel 85 Productions
“I’ve been in the content space for a while, so I’ve seen the need for better ways for athletes to monetize their content. I believe PlayersTV can fill that real need and that’s why I wanted to get involved.”

CJ McCollum: NBA Player, Players TV Investor and Journalist
“Being part of the Players TV family is an exciting opportunity to work in collaboration with other athletes to create a space where we can tell the stories that matter to us. To be able provide fans with a one-of-a-kind platform, through which they can readily gain access to content created by the athletes that they support every day, is an honor. I am looking forward to all the great content that will be showcased on Players TV and the opportunities that it will bring to all the future athlete storytellers looking for the best place to bring their own stories to life.”

Katelyn Ohashi: Gymnast and founder of Behind the Madness
“Women are only receive 4% of sports media coverage, so to have a platform like PlayersTV where we can come together as a community to push out great content and support one another is incredible.”

Chris Paul: NBA Player, PlayersTV Investor and founder of Oh Dipp!!! Productions
“In sport, they focus on the competition between players. That’s why PlayersTV is so exciting, it gives us the opportunity to come together and unite, as athletes and creators. It will be one hub where all of our content can live and then together, we can grow opportunities. This is just the beginning.”

Garrett Temple: NBA Player, PlayersTV Investor and Founder of GBT Productions
“The biggest issue facing athletes with their content is how to distribute it. We might have great content but don’t always have the opportunities to get that content in front of fans. PlayersTV is going to solve the distribution problem for athletes.”

Anthony Tolliver: NBA Player, PlayersTV Investor and Entrepreneur
“We created PlayersTV to give athletes access to a dedicated platform where they could showcase their other skill sets. I believe it’s just the beginning for the type of premium content that athletes want to produce. Through PlayersTV, we can give all athletes the freedom to create and share their passions.”

With Samsung as a strategic distribution partner, PlayersTV will debut exclusively on Samsung TV Plus beginning March 2020. Samsung TV Plus is Samsung’s ad-supported Smart TV video service, delivering free TV and instant access to over 100 channels spanning news, sports, entertainment, lifestyle, gaming, children’s programming and more. Pre-installed on all 2016-2020 Samsung Smart TVs, millions of users already use Samsung TV Plus, making it one of the top OTT services on the Samsung Smart TV platform. Users can instantly watch Samsung TV Plus for free with just an internet connection — no download, additional devices, or credit card needed.

"Samsung TV Plus is committed to providing consumers with a destination to discover free premium content on their Samsung Smart TVs," said Sang Kim, VP of Product at Samsung Electronics. "PlayersTV is a perfect addition to the Samsung TV Plus lineup for passionate sports fans to experience content created and produced by world class athletes. We look forward to the debut of Players TV exclusively on Samsung TV Plus next month.”

Samsung is one of six distribution partners, with three additional distributors launching PlayersTV before Q3 2020.

Anthem Sports & Entertainment is providing advertising and sponsorship sales support for PlayersTV. Anthem, which acquired a majority interest of AXS TV in 2019 and became partners with remaining shareholders Mark Cuban and AEG, has joined Players Media Group as a strategic partner and investor. Steve Harvey Global is also an investor in Anthem.

“Anthem is committed to building platforms that specifically engage with passionate fans and loyal audiences, and PlayersTV is exactly what we had in mind when we initially embarked on this mission,” said Len Asper, Founder and CEO of Anthem Sports & Entertainment. “Like Anthem, PlayersTV is focused on redefining the programming landscape—bringing athletes and audiences together like never before. Anthem is proud to be a part of this exciting endeavor, and we look forward to sharing it with a global audience of sports enthusiasts.”

On the content side, PlayersTV already has deals in place with content partners such as CloseUp360, the multimedia platform that takes an immersive look into the lives of NBA players off the court.

"We launched CloseUp360 with the goal of becoming the best and most in-depth storytelling platform for all players and fans in one of the world’s fastest growing sports,” CloseUp360 founder Jared Zwerling said. “They align perfectly with our player-first focus and lifestyle vision, and we’re looking forward to working with their notable players and leadership team.”

About Players Media Group
Players Media Group is an experienced digital agency with focus in media, sports and entertainment. PMG has a proven track record of helping athletes, brands and rights holders to achieve their commercial objectives through effective and engaging digital and social-first content, distribution, and intellectual property-related marketing strategies. Players Media Group has a combined 100+ years of experience in media, technology, and sports and entertainment. Visit us at http://www.players-media.com

About PlayersTV
A subsidiary of Players Media Group, PlayersTV is the central destination for fans seeking quality athlete content and intimate access into the interesting and entertaining lives of professional athletes. PlayersTV is set to launch on Samsung TV Plus in March 2020. Visit us at http://www.playerstv.co, and Instagram @theplayerstv.

About Samsung Electronics Co., Ltd.
Samsung inspires the world and shapes the future with transformative ideas and technologies. The company is redefining the worlds of TVs, smartphones, wearable devices, tablets, digital appliances, network systems, and memory, system LSI, foundry and LED solutions. For the latest news, please visit the Samsung Newsroom at http://news.samsung.com.