Program brings together startups from around the globe to capitalize on the region’s animal health and agricultural ecosystem, announces Go Topeka 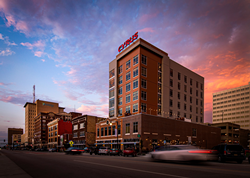 Plug and Play has selected its first batch of startups for its animal health and ag tech program in Topeka, Kan.

“This first batch of startups is a great representation of the variety of industries animal health encompasses, as well as the reach and opportunities this program promises,” said Lindsay Lebahn, program manager, Plug and Play Topeka.

GoTopeka has announced that Plug and Play, a global innovation platform that specializes in creating industry-specific accelerator programs, has selected its first batch of startups for its animal health and ag tech program in Topeka. Ten early- and mid-stage startups from numerous U.S. states, Canada and Singapore were selected after a pitch competition in March 2021.

These startups represent a broad range of innovations designed to disrupt the animal health and ag tech industries, including food safety, pet and livestock health, technology and energy. Entrepreneurs will participate in a three-month “accelerator” program in Topeka aimed at helping businesses get off the ground, providing mentorship, resources and office space.

“This first batch of startups is a great representation of the variety of industries animal health encompasses, as well as the reach and opportunities this program promises,” said Lindsay Lebahn, program manager, Plug and Play Topeka.

"Obe is thrilled to join the first animal health cohort,” said Hilary Jensen, founder and CEO of San Francisco-based Obe, Inc. “The program opens opportunities for new partnerships and a network specific to our focus on companion animal health and wellness, not to mention great peers to learn from."

Roughly two-thirds of the companies that Plug and Play invests in will have an exit, such as an acquisition, merger or initial public offering. This is a leading performance metric compared to other early-stage investors and accelerators.

“Resilient Biotics is extremely excited to be selected as part of Plug and Play's inaugural Animal Health batch,” said Chris Belnap, CEO and co-founder, Resilient Biotics in Berkeley. “Participation in the program will enable direct contact with big strategic players in the industry. We look forward to being part of the Plug and Play ecosystem.”

“These startups are coming from all over the world to spend time in the Capital City and we foresee great things to come,” said Katrin Bridges, SVP of Innovation, GO Topeka. “What’s more, this first batch is really setting the stage for Plug and Play’s presence in Topeka. It will be exciting to see the impact innovation can have on this region.”

Founding partners of the program include Cargill, Evergy, and Hills Pet Nutrition.

Based out of Silicon Valley in Sunnyvale, Calif., Plug and Play also maintains a presence in New York City, Cleveland and Northwest Arkansas. In 2019 alone, Plug and Play accelerated 1,450 startups worldwide.

ABOUT PLUG AND PLAY
Headquartered in Silicon Valley, Plug and Play is a global innovation platform with accelerator programs, corporate innovation services and an in-house VC to make technological advancement progress faster than ever before. Since inception in 2006, our programs have expanded worldwide to include a presence in over 30 locations globally giving startups the necessary resources to succeed in Silicon Valley and beyond. With over 30,000 startups and 500 official corporate partners, we have created the ultimate startup ecosystem in many industries. Companies in our community have raised over $9 billion in funding, with successful portfolio exits including Dropbox, Guardant Health, Honey, Lending Club, and PayPal. For more information, visit http://www.plugandplaytechcenter.com.

ABOUT GO TOPEKA
GO Topeka creates opportunities for economic growth that provide a thriving business climate and fulfilling lifestyle for Topeka and Shawnee County. The Greater Topeka area in Shawnee County represents a community of 178,915 people, located in the Greater Kansas City region. As the state capital of Kansas, Topeka is home to a dynamic employer base with headquartered companies including Hill’s Pet Nutrition, Advisors Excel, Security Benefit, Capitol Federal and Evergy. Topeka is located less than 40 minutes from suburban Kansas City’s shops and restaurant districts, less than one hour to downtown Kansas City, including the KC Crossroads District, the River Market and the Country Club Plaza, and an hour from Kansas City International Airport. Topeka is proud to be a part of the #KCHeartland. For more information, visit http://www.gotopeka.com

The startups selected by Plug and Play represent a broad range of innovations designed to disrupt the animal health and ag tech industries. Logo courtesy of Plug and Play.