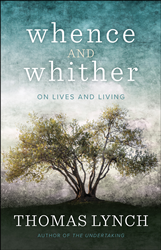 Whence and Whither: On Lives and Living by Thomas Lynch

All I can testify to are the times I knew that, if God is love, as John instructs us, then I’ve seen God and more than once. And not where I expected.

Whether he’s writing about his pig-valve heart transplant, introducing readers to a gallery of inspiring poets and poems, or describing the hearse ride at the funeral of Seamus Heaney, Thomas Lynch has an uncanny knack for writing about death—and ultimately, life—in ways that never morbid, sometimes humorous, and always thoughtful. Author of the National Book Award finalist The Undertaking, funeral director, and poet, Thomas Lynch returns with an essay collection on faith, life, and mortality.

Whence and Whither: On Lives and Living paints a portrait of Lynch’s life’s work, split between Ireland and Michigan as he moves from the funeral parlor to the university speaking circuit to the monk-like solitude of Country Clare, Ireland. Informed by the Irish countryside, his heritage, and his work up close with death, Lynch finds new ways to question the status quo, asking what we all ask as we age: What comes next? “All I can testify to are the times I knew that, if God is love, as John instructs us,” he writes, “then I’ve seen God and more than once. And not where I expected.” Essays explore Lynch’s work and the holy in relation to other poets such as William Carlos Williams, Carol Ann Duffy, and Michael Donaghy as well as what it means to grow older, the Lord’s Prayer, funerals as celebrations of life and death, and his lapsed Catholic faith.

A collection meant to be returned to and savored, Whence and Whither: On Lives and Living seeks to make sense of the senseless in celebration of life. It is now available from Westminster John Knox Press and other major retailers.

Thomas Lynch is a funeral director and writer whose work has appeared in The New Yorker, The Paris Review, The New York Times, and Harper’s, among others. He is the author of five collections of poems and four books of essays, including The Undertaking: Life Studies from the Dismal Trade, which was nominated for the National Book Award in 1997. He lives in Milford, Michigan, and Moveen, County Clare, Ireland.

Praise for Whence and Whither

“Tom has the discerning eye of a poet and essayist, the wisdom and gravitas of a funeral director, and, most of all, the empathetic imagination to be a shrewd observer of the people, living and dead, with whom he has shared this planet. And he tells these stories—and his story—the beginnings, the middles, and the anticipated endings, with the elegance of one who is a master of language and with the whimsy of one who relishes his Irish roots. This is a book to enjoy, to learn from, and to savor.”
—Thomas G. Long, Bandy Professor of Preaching Emeritus at Candler School of Theology, Emory University, and co-author of The Good Funeral

“Lynch’s latest book is a wistful but vivid collage of memoir, poems (his own and others’), stories, and even a short play. He knits these myriad pieces together with candor, humor, and some grief, conjuring the mystery that is human living and dying with insights from his well-known career as undertaker as well as his own growing awareness of getting older and the increasing loss, through death or distance, of dear friends and family members. Here, more so than ever, Lynch writes with the very soul and guts of himself and invites us to peek alongside him through the veil and into the eternal.”
—Heidi Haverkamp, author of Holy Solitude: Lenten Reflections with Saints, Hermits, Prophets, and Rebels

“If Americans sometimes seem shallow and anxious, one of the reasons may be that we hide death from ourselves. It is, therefore, no small thing that through the alchemy of brilliant language, Thomas Lynch has made these reflections on death feel safe. By turns he creates a portrait of a northern village, muses about the nature of time passing, introduces a gallery of poets and poems, meditates on profound religious questions, and offers a history of his own spiritual life. This book is marked by such humor, confidence, and grace that I wish everyone who is unsettled by death—and who isn’t?—could read it.”
—Jeanne Murray Walker, author of Helping the Morning: New and Selected Poems