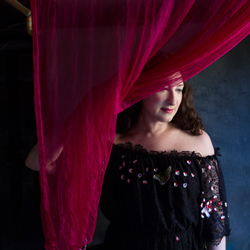 MPress Records has just released "Magenta and Blue", the third track from Poetica, a spoken-word concept album conceived, produced and engineered by 6-time Independent Music Award winner Rachael Sage. A companion lyric video for the song has also been released. The track premiered in Parade (US) and Just Listen To This (UK). With its roots planted firmly in experimental and boundary-pushing genres, Poetica is a cinematic, stylistically expansive odyssey. Its fusion of poetry with jazz, classical and Americana musical elements calls to mind such poets/musicians as Leonard Cohen, Laurie Anderson, and Patti Smith. Poetica’s self-titled album releases on October 22nd (pre-order the album HERE).

"Magenta and Blue" is a string-laden soundscape that blurs the lines between classical, Americana, jazz and cinematic music genres. Sage and Eggar recorded the song with Appalachian folk fiddler Evie Andrus.

Watch the Lyric Video for "Magenta and Blue"

"'Magenta and Blue' puts words and music to the moment when love becomes ego-less, where walls come down completely, and honesty and acceptance are givens," Sage told Parade. "The piece captures a peaceful, uplifted place where each person is embraced by the other with an expressiveness akin to the watercolor painting process, where colors and lines blur into something dreamlike, becoming more beautiful in the process."