Wesaw previously held this position from 2008-2013 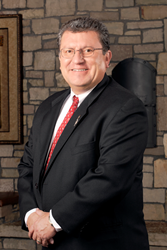 The Pokagon Band of Potawatomi Indians announced today that Matthew Wesaw was elected as its Tribal Council Chairman during the Tribe’s general election on Saturday, July 14. During the election, Kelly Curran was elected Secretary, Colin Wesaw as Elders Representative, and Gary Morseau, Sr. as Member-at-Large.

As Chairman, Wesaw will also serve as Chairman and CEO of the Pokagon Gaming Authority Board, which oversees the Band’s casino properties including Four Winds New Buffalo®, Four Winds Hartford®, Four Winds Dowagiac® and Four Winds South Bend®. This marks his third successful election as Chairman, the first time 2008 and again in 2012. In October 2013, he announced his retirement from the Council to become the Executive Director of the Michigan Department of Civil Rights. At that time, current Chairman John P. Warren was chosen in a special election to serve out the remainder of the term and was re-elected in 2015.

Other members of the 11-member Tribal Council who were not up for re-election are Vice-Chairman Bob Moody, and Members-at-Large Steve Winchester, Becky Price, Andy Jackson, and Alex Wesaw.

About The Pokagon Band of Potawatomi Indians

The Pokagon Band of Potawatomi Indians’ sovereignty was reaffirmed under legislation signed into law by President Clinton in September of 1994. The Pokagon Band is dedicated to providing community development initiatives such as housing, education, family services, medical care and cultural preservation for its approximately 5,600 citizens. The Pokagon Band’s ten-county service area includes four counties in Southwestern Michigan and six in Northern Indiana. Its main administrative offices are located in Dowagiac, Mich., with a satellite office in South Bend, Ind. In 2007, it opened Four Winds Casino Resort in New Buffalo, Mich., followed by Four Winds Hartford in 2011, Four Winds Dowagiac in 2013 and Four Winds South Bend in January 2018. It owns and operates a variety of businesses via Mno-Bmadsen, the tribe’s non-gaming investment enterprise. More information is available at http://www.pokagonband-nsn.gov, http://www.fourwindscasino.com and http://www.mno-bmadsen.com.