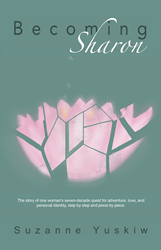 It was a real journey and made more believable by the transitions through various time periods in Trin’s life from her diagnosis of polio, time growing up in Boston, to teaching in Virginia and being at the focal point of the race riots in Washington, D.C…A must-read.

The new autofiction novel “Becoming Sharon” by Suzanne Yuskiw chronicles one woman’s seven-decade journey to find her true identity even as she is challenged by the aftereffects of childhood polio. Yuskiw’s story brushes the edges of both tragedy and triumph against a backdrop of historical moments that intersect with the author’s life. The novel touches on her birth during World War II, the polio epidemic in her childhood, racial and social unrest in young adulthood, marriage and widowhood in mid-life, and spiritual and emotional redemption in later life.

A coming-of-age story, “Becoming Sharon” follows the protagonist Sharon, also called “Trin”, as she is first challenged by disability and the constraints of her Boston Irish Catholic upbringing. Initially, tentative and shy, Trin meets many muses who serve as catalysts for personal growth. As her unique story unfolds, it also reflects that of any reader who has faced heartbreak, midlife crisis, and a hard-won resurrection.

“I decided to share a fictionalized version of my life story to allow readers to walk in the shoes of someone with a disability who nonetheless lives a full, often exciting, life,” said Yuskiw. “Having survived the polio epidemic and currently living through the COVID-19 pandemic, I hope my story helps readers see that things will improve and there is hope to be found against all odds.”

“Becoming Sharon” has already been receiving praise from top book review publications such as Clarion, Kirkus and Blue Ink:

“In the rich historical novel ‘Becoming Sharon,’ a woman experiences joy, disappointment, and continual self-discovery…her friends and family are captured via nostalgic impressions, their primary role to highlight how Sharon formed her determined personality, free from self-pity about her disability.” – Clarion Review

“The novel tackles themes of social change and racism, of religious exploration and hypocrisy and of love and identity. However, the novel reads more like an episodic memoir than a fictional tale with a coherent arc.” – Kirkus Review

“The story skillfully depicts the changes in dating norms, teacher/student relationships, the political climate, even marriage…it should not only appeal to women of the author’s age, but also to their daughters and granddaughters.” – Blue Ink Review

“I loved this book because it eloquently spoke of how we find our true self through our relationships with family, friends and partners in life. It was a real journey and made more believable by the transitions through various time periods in Trin’s life from her diagnosis of polio, time growing up in Boston, to teaching in Virginia and being at the focal point of the race riots in Washington, D.C…A must read.” – Amazon review

Readers will be captivated and inspired while reading “Becoming Sharon” as it unfolds a life that is both ordinary and extraordinary. To learn more please visit, http://www.suzanneyuskiwbooks.com.

About the Author
Author Suzanne Yuskiw taught English in Alexandria, Virginia for eight years, and later became an international coordinator at Goodwill Industries in Bethesda, Maryland. She retired early to focus on writing fiction, as well as writing and directing short plays for a small theatre group she founded. She received a BA in English from Emmanuel College in Boston and MAT in English from the University of Virginia in Charlottesville. Yuskiw was born just after D-Day and just after her father was killed in Normandy and is a survivor of childhood polio. Raised as a Boston Irish Catholic, she was a graduate of the local parish elementary and high schools. Although she grew up in the shadow of tragedy and became a widow at a relatively young age, her life is more of a celebration than mournful song as it celebrates how an average human can overcome the limitations of a handicap and triumph. Yuskiw is a mother of two and currently resides in Aiken, South Carolina.