Political Thriller Fictionalizes True Story of Corruption, Danger and the Blurred Line Between Right and Wrong

Wren Richards has published ‘NSA Unzipped and Exposed,’ the second installment of her trilogy dedicated to unearthing the corrupted morals and unethical operations of American intelligence agencies abroad 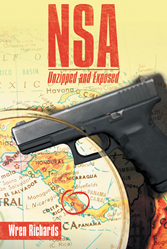 “Through this series, I really wanted to lay bare the un-American values exhibited by our country’s intelligence agencies behind closed doors,” Richards said.

Wren Richards, political activist and author, returns with “NSA Unzipped and Exposed,” a gripping political thriller about espionage, exploitation and the erosion of Americans’ constitutional right to privacy. This is the second in a three-book series, the first of which, “Natural Law,” took first place in the thriller category in the 2018 Texas Author Awards.

After a family tragedy strikes, brilliant yet troubled Costa Rican teenager Angelo Lopez is sent to School of the Americas, a U.S. Army training facility with a reputation for raising future dictators and war criminals. There, he is groomed into an NSA covert operative and sets out on a 30-year journey to fulfill dangerous missions that test his morals and fortitude.

“Through this series, I really wanted to lay bare the un-American values exhibited by our country’s intelligence agencies behind closed doors,” Richards said. “Often, these unethical actors are never held to account and go unpunished for crimes they commit while also continuing to prosper professionally and monetarily. This absolutely must change.”

An exciting and suspenseful journey based on actual events, “NSA Unzipped and Exposed” shines a light on the dangers, rewards and ethical dilemmas Americans face while working for intelligence agencies abroad. It also exposes the looming threats to privacy, property and security carried out by American operatives on foreign soil.

About the author
Wren Richards wrote “NSA Unzipped and Exposed” under a pen name for her protection. Richards is a political activist who ran for the Texas senate, served as a Democratic delegate for Wyoming, and ran political campaigns for a Wyoming representative, senator and governor. In addition to her public service, Richards served as director of a community theater in Wyoming and director of a performing arts school in Texas. She currently resides in Galveston, Texas.