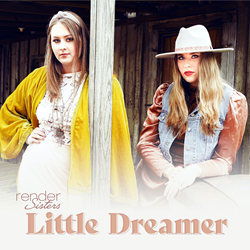 “The idea behind the song actually started when we were driving home from school one day and saw a stray dog on the side of the highway. Stella‘s face lit up as she said ‘You know what? Guys can be like stray dogs; you feed them once, and they just keep coming back.'”

Pop-country duo Render Sisters continue an impressive breakout year with their forthcoming fourth single release, “Little Dreamer,” a song which finds the harmonious sisters from Arkansas offering up some playful, yet candid advice to past boyfriends.

“The idea behind the song actually started when we were driving home from school one day and saw a stray dog on the side of the highway,” said Mary-Keaton. “Stella‘s face lit up as she said ‘You know what? Guys can be like stray dogs; you feed them once, and they just keep coming back.’”

Taking that idea into the studio, Stella and Mary-Keaton Render continue to build upon their growing collaborative writing & recording sessions with hit-making Nashville songwriter Britton Cameron (Don Williams, Jon Pardi, Dillon Carmichael), who's been co-writing and producing most of Render Sisters’ catalog since their emergence in 2020.

“After Stella’s roadside revelation, we got our song books out for our next songwriting session with Britton Cameron, knowing that we had to write a song about this stray dog and the guys who just keep coming back, idea,” Mary-Keaton continued. “We even decided this would be a good opportunity for our own stray dog who we decided to keep, Lacey, to make a cameo appearance in our new lyric video for the song. So there you go boys, there’s the one we actually kept!”

About Render Sisters:
The Render Sisters are a young pop country duo from Pine Bluff, Arkansas who were influenced to become songwriters by their grandmother, a music teacher. Having graced many small town stages since elementary school, throughout their home state of Arkansas, these harmonious teenage southern songstresses are now ready for bigger stages. Their debut songs “Lost Boy,” & “Count On Me Count On You” premiered in 2020, with the song's videos being featured on The Heartland Network, The Country Network, and WGN-TV. In 2021, Mary-Keaton and Stella Render were honored with their first set of major awards nominations as recording artists, earning a pair of nominations by the Arkansas Country Music Awards in two separate categories; Young Artist Of The Year and Video Of The Year for their debut music video “Lost Boy,” and also becoming the first Young Artist Of The Year nominee to be nominated in a second award category. They also released several new songs, including the fun and upbeat country bop “Black Roses,” which was accompanied by another lively and colorful video directed by country music icon Pam Tillis. They've also made national TV appearances on RFD-TV's Market Day Report and the Emmy award winning TV show, Teen Kid News. Even prominent Music Row Magazine journalist and country music authority Robert K. Oermann summarized in his weekly column, “Their talent is way beyond their years.”