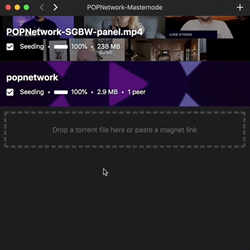 This latest release marks a major milestone as we build the future where people become owner-operators of the Internet, rather than just a commodity within it.

POP Network, a leader in decentralizing the streaming economy, today released a multiplatform upgrade to its POP Network Masternode, the feature-rich software which makes streaming on the decentralized web easy, accessible, and intuitive. The new POP Masternode adds Mac and Linux to the existing Windows distribution.

The POP Network Masternode leverages the largest peer-to-peer network in the world, with over 90 million active users, to let anyone embed decentralized streaming video on their website through simple drag-and-drop, copy-and-paste functionality.

As an alternative to using YouTube or Facebook embedded video this means viewers still consume the video on the content creator’s site but, critically, the video itself streams from the decentralized web. This ensures the value they collectively create is not automatically forfeited to those centralized corporations, effectively ends the threat of “deplatforming”, and serves as the foundation for a more equitable blockchain-based streaming economy.

“With the rise of generalized blockchain storage solutions like Filecoin aiming to decentralize the web, purpose-built peer-to-peer streaming services like POP Network are a natural extension of that movement,” said Valerian Bennett, Managing Director of The Pop Network Foundation. “POP Network is like Filecoin for streaming. What Filecoin is to S3 or Dropbox, POP Network is to CloudFront or Akamai.”

Mr. Bennett added, “This latest release marks a major milestone as we build the future where people become owner-operators of the Internet, rather than just a commodity within it.”

Plans to reward Masternodes with cryptocurrency, the POP Network Token (POP), will be announced at a later date. In anticipation of this imminent event, POP is currently being distributed exclusively on ProBit, a global exchange based in South Korea.