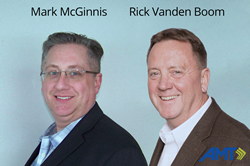 Together with the promotion of Craig Salvalaggio to Chief Operating Officer, these gentlemen are three of the most proven leaders in our industry. I know that we have the best leadership team in AMT’s history.

“A true team player and RISE Core Value Award recipient, Rick took the reins for ASG operations at a critical time for AMT,” said President and CEO Michael Jacobs. “He has been responsible for building the most capable ASG team that we’ve ever had. Rick has a passion for people and the business of AMT, and we will continue to support him in his new role as Vice President of Sales.”

Mark McGinnis joined AMT this month as Director of Systems Engineering, and has direct responsibility for the ASG group, which is dedicated to the design and build of turnkey automated robotic systems. Prior to joining AMT, McGinnis served for 16 years in a variety of leadership roles at a large automation systems integrator and has worked more than 25 years in the automation industry. A graduate of Ferris State University, McGinnis holds a Bachelor of Science in electronic engineering.

“We are thrilled to have Mark join our executive team. He is a very well-known and respected leader in the automation industry, and his knowledge and experience will be a great asset to AMT as we expand our ASG operations,” said Jacobs. “Together with the promotion of Craig Salvalaggio to Chief Operating Officer, these gentlemen are three of the most proven leaders in our industry. I know that we have the best leadership team in AMT’s history.”