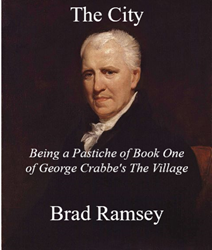 Book Cover of 'The City' by Brad Ramsey

"Pleasure, not pain, hope, not despair, are such/ As any human being has right to touch."

Postmodernist Author Brad Ramsey nostalgically employs the anachronistic language and poetics of the eighteenth century as a vehicle to express the deep emotions of despair and disillusionment which are commonly felt among clients of today's welfare state and who are often tenants of an impersonal community housing system. As George Crabbe once mocked the happy shepherds and peasants depicted in the pastoral tradition of verse and wrote of the grim conditions of an eighteenth century peasant's life in 'The Village', Brad Ramsey extends the metaphor to depict the harsh conditions of the significant but often overlooked class of people living in today's community housing within the wider welfare state in his book 'The City'.

The concept of the 'precariat' has recently debuted as a term to express a class of people who are at the very least end of our economic strata. There has also been much discussion brought forward which indicates that not only this class, but also persons feeling underemployed or being unemployed for a prolonged time are at a precarious risk to fall into this class. It is not only the lower class but even members of the middle class who have found the need to seek community services such as the food banks in their region for example. In this book length poem the reality of habitual unemployment and the need for the foodbank and other community services are depicted.

There are also through no fault of their own members of society who are unable to work for reasons beyond their control and who fall into the category of being disabled. Brad Ramsey's book depicts a slice of life of such a person, as the 'old swain' experiences community housing, the threat of homelessness, social workers and medical professionals, and finally long term care.

The author also examines the fear of dying homeless and alone.

This is the first book the author has published and his second work will be published with Literary Pastiche in June.

Published by Literary Pastiche and distributed by Ingram Spark, readers can purchase this book in bookstores everywhere as well as at Amazon.

For additional information or media enquiries, contact Literary Pastiche at 647-859-3311 or leave a message at literarypastiche.ca