Prefix Corporation Races to a Championship During 40th Anniversary Celebration 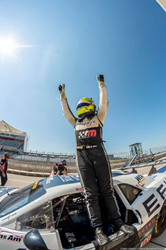 Miller celebrates win at Circuit of the Americas

“We are so proud of the hard work that has gone into this season, and especially during our big Anniversary,” exclaimed Prefix Founder and CEO, Kim Zeile.

With just two more races remaining in the season, Prefix Driver, Marc Miller earned the pole position, and the race win in Austin, Texas yesterday, providing him with this year’s Trans Am TA2 season championship. Completing a very competitive season with a series championship is an amazing accomplishment, and especially meaningful for a team that has been celebrating another incredible milestone throughout 2019. Forty successful years in business.
Miller’s No. 40 Prefix/Stevens-Miller Racing Dodge Challenger was fastest in testing, practice, qualifying, and ultimately the 100-mile TA2 feature on Sunday. But as easy as he made it look on the iconic 3.427-mile, 20-turn circuit, the race was by no means an easy one for Miller to win. “I loved that race,” said Miller. “Scott (Lagasse Jr) and I raced each other clean, but hard. I wasn’t even thinking about the championship until the finish, and it feels great. To not only win it for our team, but to win for Prefix on their 40th anniversary, how amazing is that?!”

Prefix is one of the country’s most highly-regarded organizations for the creation of prototypes, concept vehicles, and aviation design mock-ups. They create some of the most technologically advanced and high profile concept car builds in the industry, are helping to develop the latest innovations in electric and autonomous vehicles, and are even involved with movie props and theme park attractions for clients around the globe.

“We are so proud of the hard work that has gone into this season, and especially during our big Anniversary,” exclaimed Prefix Founder and CEO, Kim Zeile. “Our performance team, Stevens Miller Racing and Driver, Marc Miller all put together a fantastic effort to bring home this championship.”

The Prefix performance division provides experienced engine design, engineering, development and testing for OEMs, professional race teams, and specialty industry projects, and worked with the series to develop the new Trans Am TA2 CHOICE engine. Earlier this year, the Trans Am Race Company announced that Prefix had been selected as the Exclusive Supplier of the brand-new TA2 “Choice engine.” The “Choice” engine, which has proven successful for a number of teams this year, is a lower-cost engine that performs at the same level as current engines, and is extremely durable as well. Prefix expanded on their support of the American muscle car series by running the #40 Challenger to add to the company’s Anniversary celebration.

“Our involvement with the Trans Am series has been very beneficial to the entire company,” explained Prefix Vice President of Marketing, Jhan Dolphin. “Marc’s driving and the hard work from the supporting teammates have kept Prefix on the podium and in the news throughout the season, and that is a plus for any business. To build on this momentum, we are currently considering engine development programs for additional race series here in North America and around the world.”

The #40 ChallengerMiller takes the pole, the win, and the season championship in Austin.