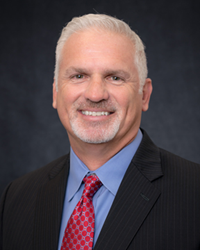 There is no individual better prepared to take PrePass Safety Alliance into the exciting future it has ahead.

PrePass Safety Alliance, the provider of PrePass weigh station bypassing, electronic toll payment and other trucking industry services, announced the appointment of Mark Doughty as President & CEO effective January 1, 2020. Doughty succeeds Karen Rasmussen, who retired as CEO at the end of 2019 after seven years at the helm of the organization.

Doughty has an extensive business background, including over a decade as president of a transportation company and several years as Chief Operating Officer for a company that provided services related to independent contractors. He had a lengthy career in consumer banking prior to working in transportation.

In addition to his new role, Doughty currently represents PrePass Safety Alliance on the board and executive committee of the Intelligent Transportation Society of America, where he also chairs the ITS America Governance Committee. Doughty also serves both on the board and on the executive committee of the Arizona Trucking Association, and as a member of American Trucking Associations policy committees governing technology and autonomous vehicles.

Rasmussen, who will remain with the Alliance over a period of time to assist with leadership transition, said: “I’ve known Mark Doughty almost 15 years and have had the opportunity to work with him in trucking and truck safety nearly that entire time. There is no individual better prepared to step into my shoes and to take PrePass Safety Alliance into the exciting future it has ahead!”

PrePass Safety Alliance (formerly HELP Inc.) was chartered as a non-profit 501(c)(3) organization in 1993, after a multi-state, truck safety demonstration project proved that technology could pre-screen and weigh qualified, safe commercial vehicles at highway speeds and allow them to bypass weigh facilities. The Alliance was established as an objective third-party entity to manage the program, to ensure that operation of the bypass system was balanced between safety and efficiency, and that carriers allowed to bypass were selected on the basis of strict adherence to standards of safety and compliance. A public/private Board of Directors provides oversight and strategic direction for the Alliance’s programs.

Today, PrePass Safety Alliance boasts nearly 630,000 enrolled trucks and hundreds of operational bypass sites in its system. The Alliance’s collaborative, non-profit approach is often cited as a model of how industry and government can work in partnership to improve highway safety.