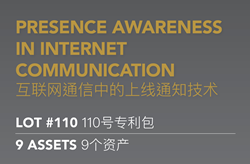 The patents in auction lot 110 disclose an invention that over come the common problems due to delays in transmitting posted comments and other information to improve a user's experience of such multiple-party communications in a computer network.

Ocean Tomo Transactions, LLC will auction a portfolio of nine US patents related to network communications, and more specifically to multiple-party communications conducted between computers in a computer network. The Patents in lot 110 disclose Presence Awareness to Internet Meetings, remote pointers of all participants, in real-time and similarly remote pointers of visitors of third-party websites.

High bandwidth internet connections have facilitated new forms of online collaboration, allowing users to conduct multiple-party communications over an internet connection by sharing a common view of a displayed page in an internet browser window while allowing users to react or post comments on the displayed page, which is transmitted to all users, thus facilitating online discussion. However, such communications suffer from a common problem due to delays in transmitting posted comments and other information between the parties. In some cases these delays reduce the usefulness of an online communication since the parties do not feel a presence of other participants in the communication.

The Patents in lot 110 disclose an invention that over come the common problems due to delays in transmitting posted comments and other information to improve a user's experience of such multiple-party communications in a computer network.

As internet communication applications generally do not provide real-time Presence Awareness about participants, the patents in lot 110 would be of interest to social portals, internet meeting providers, e-commerce providers, website publishers and hosting providers, instant messaging providers and companies in the online gaming and gambling sectors.

Even before the COVID-19 outbreak and resulting shelter-in-place-orders resulting in a significant increase in the global web-based conferencing utilization, this market was provided to grow by 10% between 2019 and 2005 according to Grandview Research.